You might take one look at Big Little Lies' Zoë Kravitz and assume that she’s got this whole ‘effortlessly cool’ thing down to a tee, but the actress has admitted that it didn’t always come quite as naturally as it does today. It’s weirdly comforting to know that the teenage years are a roller coaster of emotion for literally everyone—even Kravitz, who has admitted that growing up with the world’s coolest parents left her feeling kind of intimidated during her early years.

With Lisa Bonet as a mother, and Lenny Kravitz as a father, it should be safe to assume that the Fantastic Beasts actress slipped easily into their rock and roll footsteps, but things weren’t easy—even with actress and musician parents.

“When your mom and dad are both so cool, but you’re not, I think maybe that’s where I get this idea that I’m not really cool,” Kravitz admitted to Rolling Stone in her recent interview with the mag. “That has stuck with me forever.”

She might now be comfortable enough to pose naked on the cover of the iconic publication, but Zoë, newly engaged to fiance Karl Glusman, also went on to explain how she wasn’t the same, confident woman while growing up in her mom’s shadow. “I had opportunities because of who my family are," she said. "But that can lead to self-doubt. I then had to work very hard to earn my reputation based on my talent...

Having actual Lenny Kravitz as your dad might seem like a total dream, but Zoë says otherwise. Admitting that she wasn’t always a fan of his aesthetic, she joked: “Like, ‘Dude, can you just be low-key a little bit? Just a shirt that I can’t see your nipples through would be so dope’.”

The model and actress, who continually struggled with various eating disorders until just five years ago, added that living her life in the public eye with such famous parents definitely worked as a detriment to her mental health. “I don’t think it was about the fame, but I think it was definitely about being around that world, seeing that world. I felt pressured,” she said frankly.

See? Be a little more grateful for your super normal life—even if it is without Lenny Kravtiz and his nipple shirts. 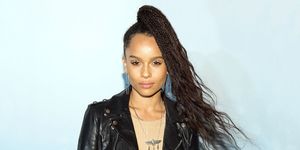 Zoë Kravitz on Being "Normal" and Her Badass New Role
Lucy Wood Contributor Lucy Wood spends most of her time writing about celebby things, reading books, and waiting for the glorious day that she have enough millions for a pet sloth.
Advertisement - Continue Reading Below
More From Celebrity
Will There Be a 'Bachelor' Spin-Off for Seniors?
Reactions to 'The Bachelor' Fantasy Suite Episode
Advertisement - Continue Reading Below
Beyoncé Performs at Kobe & Gigi Bryant's Memorial
35 Celebrities You Never Knew Were Royal
Ben Affleck and J.Lo Are Still In Touch
Bella Hadid Wore a Tiny '90s Tube Dress
Meghan's BFF on "Registering Charties" for Meghan
Gabrielle Union's Fashion-Forward Culotte Suit
Ashley Graham's New Baby Wore a Hilarious Onesie
Luna Got Her First Haircut From Jen Atkin