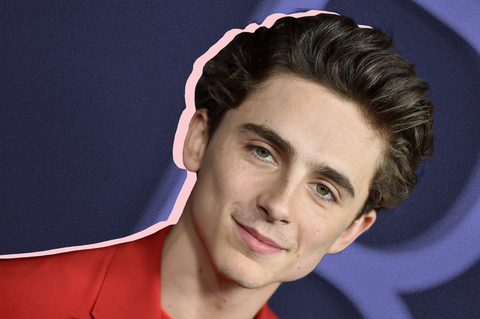 Hello, turtledoves, and welcome back to another edition of This Week in Timothée Chalamet. I hope your week was splendiferous—mine was; I was on vacation.

This will be my last post of 2018, as I want to spend time with my family, celebrating the holiest day of the year. It’s kind of fitting that it happens in late December, isn’t it? That our king was born at a time when we take a moment to reflect on the year we’ve had, and think of our hopes for the future? Yes, it is this holiday that really brings out the best in us all and makes me truly thankful. I’m speaking, of course, about Timothée Chalamet’s birthday on December 27.

Since this will be my final column of the year, I do want to take a moment to thank you for your support of This Week in Timothée Chalamet. If I may get personal for a moment, this column has been great for me. I typically write about some pretty intense stuff: Sexual assault, reproductive health access, natural disasters, sexist politicians, climate change—you know, fluff. And though I take my responsibility in reporting those stories very seriously, and feel extremely honored that I get to do so in the hope that change will occur, it’s been incredibly nice to be able to spend an hour or so at the end of each week writing about a cute actor and things adjacent to him. So thank you for reading it, it means a lot to me.

Anyway. Lét’s get on with the news:

Did his publicist tell him to keep us posted more frequently, because compared to the absolute misery that was trying to come up with things to talk about this summer, we have had a Timothée Chalamet social media windfall of late.

This week, it’s...uh, whatever he’s doing in this photo series:

Seems like a lot of travel photos—two pics out car windows, a blue sky from out a plane, a TV that I assume is in an airport, another (seemingly private) plane pic (well done, Tim)—and I wonder if he’s trying to tell us something. Where could he be off to?

Or maybe he’s just traveling around and bored and wants clicks which, honestly, is the most relatable content of all.

Ugh, this story is a bummer. Karama Brown from Netflix’s wonderful Queer Eye reboot recently told Insider that he didn’t think the supposedly charming love story in Call Me By Your Name was all that charming. In fact, he called it “problematic as f*ck.”

His key issue was with how it appeared: Even if the text said Oliver is 24 and Elio is 17, Armie Hammer doesn’t look 24. “It looked like a grown man having sex with a little boy,” said Brown. And painting it with a shimmering romantic light, he told the publication, could be a dangerous message:

“I've worked with many survivors of sexual assault, especially in the LGBTQ community, which oftentimes goes unreported. And so the minute I saw that movie, I thought, 'Here we are glorifying this sort of relationship.’...I think to myself, 'If that was an older man, or a perceived college student who looked that much older with a 16 or 17-year-old girl, we would have all had a hissy fit.' We would have recognized that this is a problem. But for some reason, because it was two men, we're just like, 'Oh, well this is just exploration.’”

As much as it pains me to have to examine a piece of art that I love in a critical light, I think Karamo makes a good point. As a white woman in heterosexual relationship, I’m obviously watching this movie through a lens of immense privilege. Statutory sexual assault shouldn’t be romanticized, and though this film has some built-in caveats, it’s not a stretch to see why the optics could be triggering for some people. Plus, he’s right: If it was an older man and a younger woman, alarm bells would automatically go off for me. The fact that they didn’t go off in the same way here highlights that privilege.

Now, do I think the fact that this movie is problematic means that I should stop liking it, or feel bad that I liked it in the first place? No. But it’s important to entertain different perspectives and understand how our own view might be limited.

Understanding someone’s criticism of a thing you like and using it as a growing experience?! Uh-oh. This is the future liberals want.

There’s a charity in Timmy’s honor!

Let’s end on a very merry note. One of This Week in Timothée Chalamet’s favorite fan-sites, @TimmyIllustrated, has created a fundraiser as a birthday gift to Timmy:

The initial fundraiser sought donations for the Centre of Addiction and Mental Health in Toronto, Canada, chosen as a tribute to Timmy’s role as real-life recovering addict Nic Sheff in Beautiful Boy. Kayla (the force behind @TimmyIllustrated) asked people to send donations, or to donate to a charity or nonprofit local to them and send her a screenshot so she knew to include their name on the card to Timmy.

Since posting a week ago, Kayla has raised $4,000 for charity and helped 19 organizations, including Substance Abuse Solutions of North Carolina, the National Alliance on Mental Illness, New York Phoenix House Patient Assistance Fund, and Fondazion Exodus Onlus (an Italian addiction service organization). If you want to join, check out the @TimmyIllustrated Instagram for more details.

This is the spirit of the season: Thinking about what you can do to help those in need and then mobilizing to do it. And I’m sure it will mean a lot to Timmy, who as you know, has been traveling the country doing screenings of Beautiful Boy and talking about why addiction is such a serious issue. Maybe this should inspire all of us to use our fandom for good. I love this. Great work, Kayla, and everyone who donated.

And that’s the news. Until next year, a merry Timmy’s Birthday to all and to all a good night.