Today's Top Stories
1
Can Tayshia Adams Steal You For a Sec?
2
People Have a Lot of Feelings About 'I Care a Lot'
3
Watch Prince Harry's Interview with James Corden
4
Found: All-Natural Makeup Brands That Deliver
5
The Founder Who Got Meghan Markle to Invest
Getty Images

Up there with eating so much that you have to lie down for a while, and watching Hugh Grant in Love, Actually, the Queen’s speech is one of the oldest and most loved royal Christmas traditions across the world. And, with just one day to go until royal family fans gather to watch her annual delivery, Kensington Palace has shared a photo and sneak peek snippet of what we can expect from Her Majesty this year.

The Christmas Day speech from the British monarch is a long-standing tradition, first started by Queen Elizabeth’s grandfather King George V in 1932. 86 years later, for 2018, the Queen will use her Christmas Day speech to send a message of “peace on earth and goodwill to all.” Her Majesty says it’s a theme that is “never out of date. It can be heeded by everyone; it’s needed as much as ever”.

Tomorrow, at 3pm GMT, the 92-year-old Queen will tell viewers from Buckingham Palace’s white drawing room: “Even with the most deeply-held differences, treating the other person with respect and as a fellow human being is always a good first step towards greater understanding.”

As well as the wider message, this year the Queen has also chosen to include a few smaller, sentimental hidden gems in her pre-recorded Christmas Day message, which gives the whole thing a lovely, personal touch.

Along with her elegant silk and lace cocktail dress, made by senior designer Angela Kelly, Queen Elizabeth II will wear a sentimental and special present given to her by husband, the Duke of Edinburgh. The Queen, who takes her choice of brooch very seriously, selected the stunning gold, ruby and diamond brooch, which Prince Philip gave to her in 1966. It's one of her festive favorites, which she has previously worn for past Christmas speeches and royal appearances.

As well as the sweet tribute to her husband, Queen Elizabeth has also chosen to feature a rare family photograph on her bureau. The adorable black and white picture, taken in 1949, shows Her Majesty and Prince Philip as a young couple, holding a sixth-month-old Prince Charles. Cute, right? It’s likely that the Queen chose this one as a subtle shout out to her son, the Prince of Wales, celebrating his 70th birthday just last month.

It's not Christmas until Queen Elizabeth II officially says so. 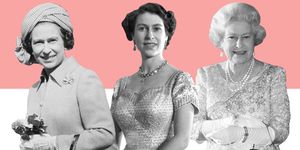 Queen Elizabeth's Most Iconic Style Moments
Lucy Wood Contributor Lucy Wood spends most of her time writing about celebby things, reading books, and waiting for the glorious day that she have enough millions for a pet sloth.
This content is created and maintained by a third party, and imported onto this page to help users provide their email addresses. You may be able to find more information about this and similar content at piano.io
Advertisement - Continue Reading Below
More From The Ultimate Guide to the Royal Family
How to Make the Queen's Favorite Cocktail
The Queen Told Harry to Uphold His Family Values
Advertisement - Continue Reading Below
Twitter Is Thirsting over Prince Harry
Your Guide to the Current Royal Line of Succession
A Look Back at Princess Anne's Life in Photos
A Look at Royal Family Portraits Through the Years
Diana's Unearthed Letters to a Friend for Auction
The Queen Hoped Harry & Meghan Would Cancel Exit
Will Is Sad and Shocked by Harry's Reply to Queen
Kim K Is Ready to Move On After Filing for Divorce