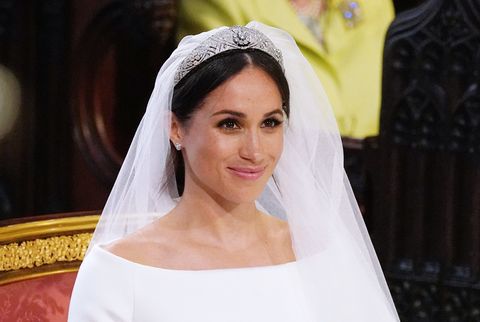 If your Instagram feed, like mine, is filled with friends/family/influencers/that-person-you-haven't-actually-spoken-to-in-five-years reflecting on their 2018s (#topnine) and sharing their resolutions for 2019, it might have you thinking about your goals for the new year. Up until a few minutes ago, I'd half-heartedly decided that my New Year's resolution would be to eat healthier because it sounds like a good thing to do, but great news: That's canceled. In fact, everything's canceled because I have learned what Meghan Markle's 2016 resolution was and I want that.

On her now-defunct blog, The Tig, Meghan shared that every single year she makes the same resolution: To quit biting her nails and to stop cursing as much. Admirable resolutions that I feel eh about because neither are major problems for me. But after reading what she wrote about her resolution for 2016—you know, the year she was introduced to and started dating Prince Harry—I was INTRIGUED:

"This year, I resolve not to have a resolution," Markle wrote in a post on The Tig, according to Martha Stewart Weddings. "For this new year, the only thing I aim to do is to approach life playfully. To laugh and enjoy, to keep my standards high but my level of self-acceptance higher."

This alone is pretty inspiring and resolution-stealing-worthy, but it gets even better:

"My New Year's resolution is to leave room for magic. To make my plans, and be okay if they sometimes break. To set my goals, but to be open to change," Meghan wrote, and encouraged her fans to do the same.

What a beautiful, hopeful intention to set going into the new year. Also, can you think of anything more MAGIC than going on a blind date with Prince Harry six months later and:

So I'm hereby ditching all current/future resolutions and adopting magic going forward, forever. Because Prince Harry might be taken, but maybe I'll get a tiara out of it?

Related Stories
Shop Every One of Meghan Markle's Best Looks
Meghan Markle Is the Most Googled Person in 2018
Sally Holmes Editor in Chief Sally is the Editor in Chief of Marie Claire where she oversees coverage of all the things the Marie Claire reader wants to know about, including politics, beauty, fashion, and celebs.
This content is created and maintained by a third party, and imported onto this page to help users provide their email addresses. You may be able to find more information about this and similar content at piano.io
Advertisement - Continue Reading Below
More From Celebrity
Charles Expertly Ignored Boris Johnson's Snafu
How Kitty Spencer's Wedding Dress Honored Diana
Advertisement - Continue Reading Below
Dolly Parton On the #FreeBritney Movement
Will & Kate Are Nervous About George's Future
George Won't Be Forced to Go to Boarding School
Diana Would Have Written a Memoir Too, Friend Says
A Slice of Diana's Actual Wedding Cake Is For Sale
Matt Damon Trolled Ben Affleck and Jennifer Lopez
This Old Video of the Queen Saying "Nah" Is LOL
Diana Had a Secret Message on Her Wedding Shoes