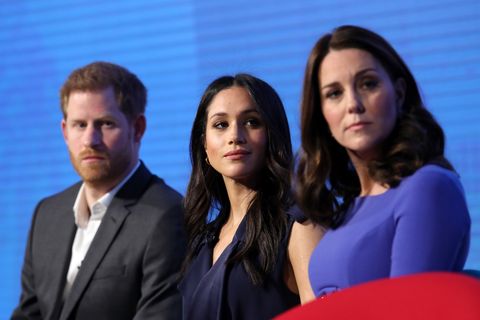 By now, there's a good chance that you've heard that Prince Harry and Meghan Markle are expecting their first child together sometime this spring. If this is the first you're hearing of it, first of all, congratulations on finally waking up from the coma you've clearly been in and second, know that people are pretty excited about the news.

Since Harry and Meghan announced that they were expecting back in October (just ahead of their first official royal tour as husband and wife), royal fans around the world have been clamoring for details about the pregnancy/birth/baby/everything and turning to wild speculation and intense deep dives into royal baby-having traditions to fill in the gaps. One of the biggest questions on people's minds? Who will be the baby's godparents (because royal kids get several of them)?

If you're hoping to see "Prince William" and "Kate Middleton" on that list, you're almost certainly in for some disappoint—and here's why.

Royals don't typically ask siblings to be godparents to their children.

This "snub" has nothing to do with rumors of a feud between the factions of the Fab Four and everything to do with royal tradition and protocol. It's not that there's a stated reason that siblings aren't traditionally tapped as godparents for little princes and princesses, it's just that, well, they aren't. Harry isn't a godparent to any of Will and Kate's kids (and neither is Meghan, even though she was already poised to join the family when Louis was born).

When Prince George was being christened, royal correspondent Robert Jobson explained that, as an immediate relative, Harry "will have a role in [the baby's] life anyway." Hope that clears things up?

So who will be godparents to Harry and Meghan's baby?

The short answer is close friends, aides, and maybe some distant relatives.

"As with George and Charlotte, [William and Kate] chose close and trusted friends and aides, rather than immediate family members, and the odds suggest that will be the same with little Prince Louis," Jessica Bridge, of British bookmakers Ladbrokes, said in a statement, according to People when discussing Will and Kate's godparent choices for Louis.

Harry and Meghan are likely to go the same route in choosing godparents for their kids. George and Amal Clooney have been suggested as possibilities and Meghan's longtime BFF Jessica Mulroney is considered a frontrunner for the honor.

Related Stories
How Old Meghan Photos Will Be Used To Hurt Kate
Will Amal and George Clooney Be Royal Godparents?
Kayleigh Roberts Contributor Kayleigh Roberts is the weekend editor at Marie Claire, covering celebrity and entertainment news, from actual royals like Kate Middleton and Meghan Markle to Hollywood royalty, like Katie Holmes and Chrissy Teigen.
This content is created and maintained by a third party, and imported onto this page to help users provide their email addresses. You may be able to find more information about this and similar content at piano.io
Advertisement - Continue Reading Below
More From The Ultimate Guide to the Royal Family
The Queen's Corgis Are Helping Her With Her Grief
Charles is Looking Forward to Seeing Harry Again
Advertisement - Continue Reading Below
Will & Harry to Walk Together at Philip's Funeral
Prince Charles Addresses Prince Philip's Death
Prince William Pulls Out of 2021 BAFTA Appearances
Prince Philip Said He Had No Desire to Live to 100
The Queen Was by Prince Philip's Side When He Died
Prince Harry Is "Really Upset" Over Philip's Death
Will Harry & Meg Attend Prince Philip's Funeral?
The Queen Is Hopeful Prince Harry Will Return Home