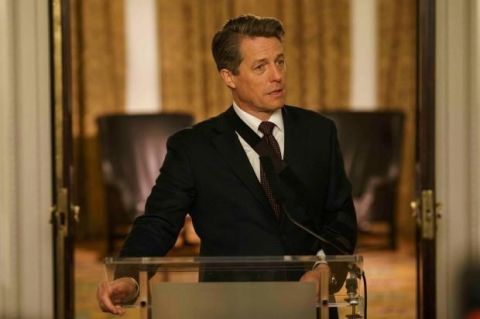 Arguably one of the most memorable and heartfelt bits of the original Love Actually movie is Prime Minister David's speech. Seriously: all the tears.

Which might be why Twitter was so damn touched when Hugh Grant's character gave a second speech in Red Nose Day Actually, the hotly-anticipated reunion film.

After dancing to 'Hotline Bling' by Drake in his bedroom and falling down the stairs, David gives a speech in front of his now spouse Natalie (side note: yaaaaas), as well as a load of British press, which is not only emotional, but seemingly timely in light of recent events.

Asked whether he's still optimistic after coming back to be Prime Minister 14 years later, David says:

"Times have obviously got harder. People are nervous and fearful. And it's not just in politics that things have got touch. Usain Bolt has run his last Olympics.. The Harry Potter Films have finished. Piers Morgan is still alive. But let's look at the other side of the clock. Metallica's new album is an absolute cracker. On the deeper side of things, I'm optimistic. Wherever you see tragedy, you see bravery too, where you see ordinary people in need, you see extraordinary ordinary people come to their aid. Today is Red Nose Day and people are giving their hard earned cash to people who they'll never meet but whose pain and fear they feel and want to fight."So it's not just romantic love that is all around most people still every day every where have enough love in their heart to help human beings in trouble. Good's going to win. I'm actually sure of it.'

And yeah, it's safe to say people loved it: