We already know that Rachel Weisz will be at the 2019 Oscars, thanks to her Best Supporting Actress nomination for The Favourite. Meanwhile, Weisz's husband, James Bond star Daniel Craig, has been announced as a presenter this year. So, the big question: Will the pair, who are married but incredibly quiet about their relationship, walk the red carpet together? Even better: Will we see some of their rare-but-adorable PDA?

While you're munching on popcorn during a commercial break and thinking dreamily about the couple that might be, oh, I don't know, only the most beautiful pairing of all time, let me take you on a journey. A journey into the relationship of Rachel Weisz and Daniel Craig—or, at least, what we know about it.

They've known each other ages.

According to Metro, the couple first met at college but didn't get together until after they starred in Dream House in 2010. Before Daniel, Rachel said she wasn't sure she ever wanted to get married, but he changed her mind very quickly. Less than six months after they got together, the two got quietly married in June 2011 in New York.

Calling them "one of the most private couples in Hollywood," HELLO!, reported that the event was attended by the pair's children and absolutely nobody else.

Rachel has talked about protecting the relationship. "He's just too famous. It would be a betrayal. You have to protect your marriage," she said. "When you're young, you tell your girlfriends everything. One of the great pleasures of not being an adolescent is that you don't have to share everything. When you're married, that door closes. The audience goes, and you're in your own life."

She's also said that the two are both in agreement about keeping their relationship ultra-private: "Daniel and I are really similar...We’re just really crap at talking about our private lives."

When they do show PDA, it's epic.

In 2015, Craig and Weisz attended The Cinema and Television Benevolent Fund's Royal Film Performance—Craig was promoting Spectre at the time—and the pair showed some public PDA. And seriously, guys, the photos are so cute that I'm just going to leave them here and let you look at them.

They support each other's work.

In an interview with Good Morning America to promote her film Disobedience, Weisz said, "We talk about films that we love or plays. We love to go to see theater and discuss things that we've seen," she said. "We respect each other. We appreciate each other's work. He liked Disobedience very much."

But she did tell The Sun in 2013 that they don't just get together to talk about their work. "There is nothing worse than two actors getting together and talking about acting. It’s like the end—it’s the worst."

They have a daughter together.

Weisz announced to The New York Times in April 2018 that she and Craig were going to have a baby. "I’ll be showing soon," Weisz said. "Daniel and I are so happy. We’re going to have a little human. We can’t wait to meet him or her. It’s all such a mystery."

In September, the two welcomed a daughter. Rachel also has a son with ex Darren Aronofsky, and Daniel has a daughter with ex-wife Fiona Loudon.

Later that year, Rachel said hadn't planned on having any more children. "But the preciousness of a new life and family means so much more now I’m more mature and older," she added. She also divulged that their little girl looks a lot like Daniel.

They do charitable work.

Also in April 2018, the couple attended and spoke at The Opportunity Network's 11th Annual Night of Opportunity Gala:

They're quietly creative together.

In 2018 Rachel confirmed, in case there was any doubt, "I’m very happy being married, very, very happy." "I love being Mrs. Craig," the actress added. "I’m Mrs. Craig on my checkbooks and passports and things." Reportedly, the two love talking about books and poetry, and apparently they love cooking together, too. 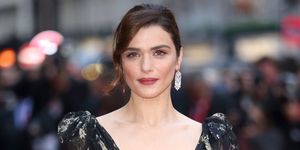 How Rachel Weisz's Mom Escaped the Holocaust
Katherine J Igoe Katherine’s a Boston-based contributing editor at Marie Claire online who covers celebrity, fashion, entertainment, and lifestyle—from “The Bachelor” to Everlane to Meghan Markle.
This content is created and maintained by a third party, and imported onto this page to help users provide their email addresses. You may be able to find more information about this and similar content at piano.io
Advertisement - Continue Reading Below
More From The Oscars 2021
See Adele's Perfect Oscars After-Party Look
Emrata Wore the Most Emrata Outfit to Oscar Party
Advertisement - Continue Reading Below
J.Lo Outshone Everyone at the After Parties
Please Look at These Brad and Regina Photos
Chrissy Wore a Mint Dress With a High Slit
Jennifer Aniston Saved Her Best LBD for Last
Did You Spot Charlize Theron's Hidden Hair Detail?
Billie Eilish's Reactions Made the Oscars
Timmy Photobombed Margot on the Oscars Red Carpet
Elizabeth Banks Rewore Her 2004 Oscars Dress