Going into the 2019 Academy Awards this weekend, a question might pop into your head all of a sudden: Wait, how does this all Oscars stuff work again? I feel like every time I watch the ceremony (so, once a year), I have to refresh my memory about what's going on with this "voting" situation. So! I made this handy primer for you to refer back to, this year and all the years ahead that you might watch the year's biggest movie award ceremony. Enjoy!

This part is the most complex. There are 24 available categories, and roughly 6,000 Academy members who typically belong to a "branch" of the industry. An example: Gwyneth Paltrow came on to the scene as an actor, so that's her branch. Each member can only be in one branch—actor, film editor, etc.—and can mostly only vote for other people also in that specialty (e.g. other actors, other film editors), per the Academy's website. The exception is the Best Picture category.

Once a film is eligible for nomination—meaning it's been shown in an L.A. movie theater for a week, and is more then 40 minutes long (except for Short Film)—members select their top five picks and are told to "follow their hearts," per People. I feel like that could be interpreted a lot of ways but, okay.

Also complicated! Basically, there's a formula that spits out a number that is the bare minimum requirement for a nominee to be selected. Below is the exact math, if you're curious, according to People.

"The magic number is calculated by taking the total number of ballots received for that category and dividing them by the number of possible nominees plus one, and then rounding it up to the nearest whole number."

Okay, then. Moving on: Once a candidate gets to that special number, the remaining ballots are redistributed in favor of the second name on the ballot. So once one person or film has enough nominations, that name is no longer counted and the people who are counting move on to the next name on a voter's top five list and begin the process over (this is called redistributed votes). This repeats itself until there are five nominees per category. Phew.

I could probably write a whole book about how the voting process used to work. Fun fact: Up until 1950, if one nominee came within three votes of the winner, he or she ALSO won. These days, the process is simpler. Each Academy member gets to vote in each category, only once, submitting the full ballot to the Academy within a certain timeframe and sworn to secrecy. Then, the votes are tallied up, and whoever has the most wins. Simple!

From beginning to end, accounting firm PriceWaterhouseCoopers spends seven days counting the votes—each one is counted by hand, and the Oscars for most of its history has used paper ballots (although that's being phased out).

So, in conclusion, the whole thing is a process. AND on top of all that, even with all that prep work and secrecy, sometimes a tie can happen, or a mistake in handing out the wrong envelope. Just in case you need a reminder of the Moonlight/La La Land situation in 2017:

The 2019 Oscars have already been dramatic as is. We don't need another one of these—expected voting surprises only, please. 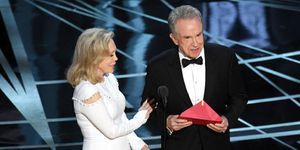 'Moonlight' Wins Best Picture After Epic Mistake
Emma Stone Reacts to Moonlight's Big Oscar Win
Katherine J Igoe Katherine’s a Boston-based contributing editor at Marie Claire online who covers celebrity, fashion, entertainment, and lifestyle—from “The Bachelor” to Everlane to Meghan Markle.
This content is created and maintained by a third party, and imported onto this page to help users provide their email addresses. You may be able to find more information about this and similar content at piano.io
Advertisement - Continue Reading Below
More From The Oscars 2021
Twitter Is Not Happy With How the Oscars Ended
Glenn Close Dances to "Da Butt" at the Oscars
Advertisement - Continue Reading Below
‘Ma Rainey’s Black Bottom’ Oscar Makes History
The Oscars Were All About the '90s Midriff
Alan S. Kim Channeled David Rose at the Oscars
How Daniel Kaluuya's Mom Reacted to His Speech
Carey Mulligan Is a Gold Goddess at the Oscars
Riz Ahmed Put Every Husband to Shame at the Oscars
The Best Red Carpet Looks at the 2021 Oscars
How to Watch or Stream the Oscars