It took a while to get there (and there’s still a long way to go), but Hollywood is finally waking up to the importance of diversity and representation in film. The movie industry has seen huge success with female-dominated films like Ocean's Eight, black excellence films like Black Panther, and all-Asian casts with Crazy Rich Asians.

Now, please make way for Priyanka Chopra and Mindy Kaling, who are about to create what’s sure to be your new favorite comedy. It’s been reported by Deadline that Kaling and Chopra have teamed up together on their latest project, to bring a star-studded Indian wedding comedy to the big screen.

Plot-wise, the film will reportedly take place across both America and India, and give a romcom twist to a huge wedding in India, along with the culture clashing that ensues with the relationship. Per Deadline, it’s already being dubbed as "Crazy Rich Asians meets My Big Fat Greek Wedding."

Um, is this also starring the Jonas Brothers and Sophie Turner?

The movie is already highly anticipated with a selection of big names like Sony, Netflix and Amazon Studios battling it out for the rights to this one. In the end, Universal came out on top. As well as starring in the film, Mindy may also be directing the project and will definitely be behind the writing too, along with her Brooklyn Nine-Nine co-creator, Dan Goor. Told you it sounded like a recipe for super success.

It goes without saying that Priyanka is the perfect choice on all things wedding for the project, after pulling off the most lavish and luxury big day (or should I say selection of big days) last year with her new husband, Nick Jonas. If this movie doesn’t feature a 75 foot long veil for the bride, then something’s gone terribly wrong.

As for Mindy, she can add this one to her VERY long To Do list, along with Late Night with Emma Thompson, the Four Weddings and a Funeral TV series adaptation, and her new Netflix series currently casting for real people.

I’m already VERY excited for this one. 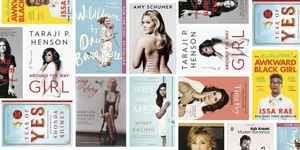 11 Celebrity Books You Should Have Read By Now
Lucy Wood Contributor Lucy Wood spends most of her time writing about celebby things, reading books, and waiting for the glorious day that she have enough millions for a pet sloth.
This content is created and maintained by a third party, and imported onto this page to help users provide their email addresses. You may be able to find more information about this and similar content at piano.io
Advertisement - Continue Reading Below
More From Celebrity
William Will Suffer "Worst" from Harry's Memoir
Simone's Boyfriend Sent Her the Sweetest Message
Advertisement - Continue Reading Below
Harry's Friends Don't Want to Be in His Memoir
Will & Kate's Modern Approach to Raising George
Meet Simone Biles's Super Supportive Parents
What Happens on Katie's Season?
Bennifer Recreated Their 2002 PDA Moment
Why Harry's Memoir Release Date Has Upset People
The Royals Are Worried About Prince Harry's Memoir
Gabrielle Union Debuted a New, Short Haircut