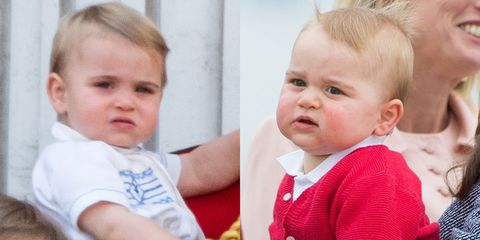 For years, Prince George has held the unofficial royal title of Grumpiest Royal, thanks to the magnificent range of faces he's treated us to in his five years on this planet. From his early days as a wee royal, George emoted to an impressive degree, giving us baby grump to an iconic level. Do you remember his appearances during an official Australia and New Zealand tour in 2014? Grumpiest.

But today, a new grumpy royal appeared in town, specifically Prince Louis on the balcony of Buckingham Palace. And he gave Royal Grump that is not to be overlooked.

During the Trooping of the Colour with his family—including his father, Prince William, mother, Catherine, Duchess of Cambridge, his siblings, Prince George and Princess Charlotte, aunt and uncle, the Duke and Duchess of Cambridge, grandfather, Prince Charles, and, of course, his great grandmother, the Queen, whose birthday this royal lot was celebrating—little Louis showed he too has a lot of feelings. The youngest Cambridge was first spotted at a window of Buckingham Palace alongside his sister as the pair peered out on the parade. It was the first sign of grump:

And then, when the fam made their appearance on the balcony, Louis whipped out the adorable grouchy face:

Then Louis and George appeared to have a grump-off:

He also exhibited some exceptional 'tude with his royal wave:

Here for all the faces, Prince Louis, please keep them coming! And yes, George, you still need to bring it... you might be looking more grown up these days, but we still love that face!

Related Stories
Will Fixed George's Hair at Trooping the Colour
Every Outfit Kate Middleton Has Worn to Trooping
Why Prince William Wasn't With Meghan and Harry
Sally Holmes Editor in Chief Sally is the Editor in Chief of Marie Claire where she oversees coverage of all the things the Marie Claire reader wants to know about, including politics, beauty, fashion, and celebs.
This content is created and maintained by a third party, and imported onto this page to help users provide their email addresses. You may be able to find more information about this and similar content at piano.io
Advertisement - Continue Reading Below
More From The Ultimate Guide to the Royal Family
Kate Wore a Pearl Bracelet That Used to Be Diana's
Harry's HRH Title Was Removed from a Diana Display
Advertisement - Continue Reading Below
Harry and Meghan Are Trying to Keep the Peace
Films That Pull Back the Curtain on Royal Life
Harry Was Left to Suffer After Diana's Death
How Queen Elizabeth II Got the Nickname Lilibet
What Charlotte and Lilibet's Names Have in Common
Royal Family Reacts to Sussex Birth Announcement
The Meaning Behind the Royal Family Member's Names
Your Guide to the Current Royal Line of Succession