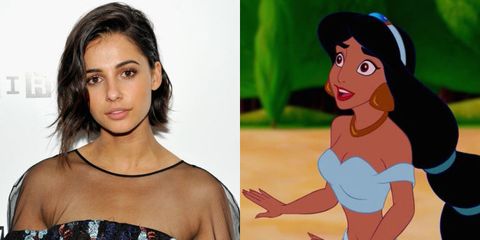 Disney finally announced the leads for its upcoming live-action adaptation of Aladdin. Mena Massoud will play Aladdin and Naomi Scott will bring Princess Jasmine to life. Here are 7 things you need to know about the newest actress cast to play a Disney princess.

Scott is from London, but her mother, Usha Scott, is from Uganda and is of Gujarati Indian descent. Her father, Christopher Scott, is British. Scott is proud of her heritage and has showed off her Indian roots several times on Instagram.

2. Her parents are pastors.

Scott's parents share a career—they're both pastors at the Bridge Church, Woodford in Redbridge, United Kingdom. The church's website describes it as "a community of ordinary people who have found peace, joy and purpose in an extraordinary God."

3. She started her career as a musician.

She started out performing with the Bridge Church Youth Band and was later discovered by British pop singer Kelle Bryan.

"I grew up singing in church actually. That's kind of where I just the usual, I grew up on gospel music. I was singing from a young age." she said in an interview with Huffington Post. "I remember that I chose 'Don't Speak' by No Doubt so that was my first kind of performance. I think from there, I felt like it was something I actually really enjoyed and wanted to do."

#radar #underthebridge such a great venue! Thanks @allsaintslive for the sick dungarees.

She released her first EP, Invisible Division, in 2014 and her second EP, Promises, this year. She plays piano and started writing her own songs when she was just 15.

Really enjoyed supporting the lovely @fifirong. What a great show! Thanks to everyone who came out. Goodnight x

Even though she's just 24, Scott has already taken some major life steps. In 2014, she married soccer player Jordan Spence after four years of dating.

Happy Birthday @jordanjspence my BFF. You're also really hot, really clever and smell nice....basically all the things I look for in a husband.

5. She already has a Disney connection.

6. She's kept in touch with her Disney costars.

In 2015, she posted a picture hanging out with her Lemonade Mouth costar Bridgit Mendler. So basically, she could be forming lifelong friendships with her Aladdin costars.

7. She's already played one of your childhood favorites.

This year, Scott starred as the Pink Ranger in the new Power Rangers movie, meaning she already has experience playing a character near and dear to the hearts of '90s kids.