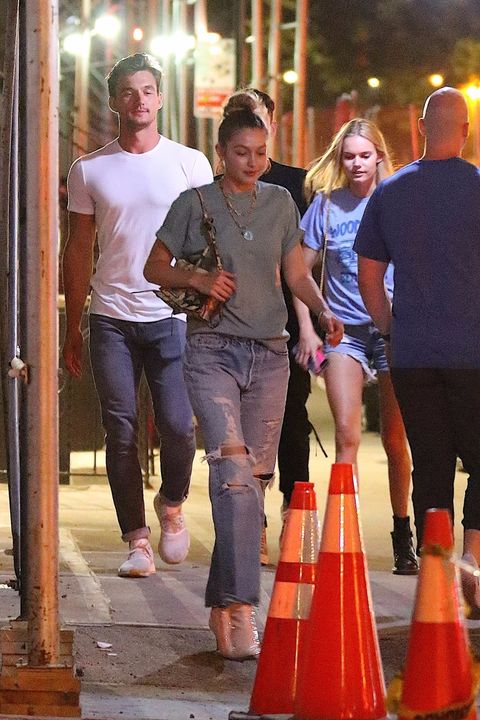 Finally, after days of hanging out and dates where they've been spotted leaving the same place (i.e. Gigi Hadid's apartment) separately, Gigi and Bachelorette runner-up Tyler Cameron where photographed together Monday night. The pair where snapped leaving Ray's, a bar owned by Justin Theroux in the Lower East Side of Manhattan. They both wore jeans and a T-shirt and SMILES.

*Chris Harrison Voice* Is this the most dramatic moment on the Bachelor yet? I mean no, remember when Arie dumped Becca on camera? But also, MAYBE.

The two models have been spending time together since the beginning of August when they were spotted by a fan at the Soho House. Since then, they've been seeing each other regularly, including Monday day, when Tyler was photographed leaving Gigi's apartment around 6 p.m. (in shorts and a T-shirt—have to admire his unwavering personal style) just before she stepped out to visit a friend's house 45 minutes later. It seems they then met up later when they hit Ray's together with Gigi's friend, Cully Smoller.

"Their dates are definitely real and he’s having a good time," a source told People of the pair on August 6, refuting rumors that this is all a PR stunt. But at that time, the source was hesitant to define the relationship: "It’s too soon to say Tyler and Gigi are ‘dating.’" Which makes sense, it's not like this is the Bachelor or something...people can spend more than two weeks together without DTRing in the real world.

This is all exciting stuff—but perhaps not so much for Hannah B.-Tyler hopefuls. The former Bachelorette shared her feelings after the initial news came out that her ex had spent time with Gigi Hadid—just after they had spent a night together. "I have feelings, but I’m also single and he’s single and I wanna keep my options open and he can keep his options open," Hannah told ET.

"Honest policy: I’m struggling," Hannah wrote in the caption. "Life is so different. Since last August, I’ve been a pageant queen, a bachelor contestant, and the Bachelorette. I’ve been in love with multiple people, I got engaged, I broke off an engagement, and I shared it all with millions of people. My faith has been questioned by thousands who don’t know my heart, and my transparency with my decisions has labeled me promiscuous. Simultaneously, I’ve become a role model for young women and started bigger conversations around faith, and sex. // I’m living on my own for the first time and shuffling through this life of next steps with press, media, and opportunities galore."

Related Stories
A Complete Gigi Hadid and Tyler Cameron Timeline
Keep an Eye on This 'Bachelorette' Contestant
This content is created and maintained by a third party, and imported onto this page to help users provide their email addresses. You may be able to find more information about this and similar content at piano.io
Advertisement - Continue Reading Below
More From Celebrity
The Palace Just Shared Prince Louis Birthday Pic
Meghan and Harry Talked Every Day During UK Trip
Advertisement - Continue Reading Below
J.Lo Wishes A-Rod's Daughter a Happy Birthday
Irina Shayk Shared a Rare Photo of Her Daughter
John Travolta Talked Dancing With Princess Diana
Meghan Markle and Archie Speak to the Queen
Who Is Alexandria Ocasio-Cortez's Partner?
Did Charles, Harry, and William Mend Relationship?
The Kardashians' Most Body-Confident Nude Shoots
Chrissy Teigen + Meghan Markle Spoke About Loss