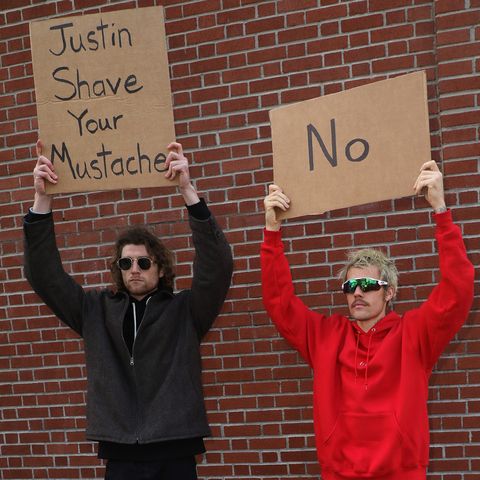 A constant companion since his 2020 comeback, Justin Bieber's mustache has proved unusually divisive, with some fans begging him to get reacquainted with a razor (my unrequested opinion: People should do what they want with their faces.) And it looks like he's done just that: On Sunday, Bieber posted a photo of his mustache-free face, labeling it, "Baby face BIEB" and adding the caption, "I shaved. MUSTASHIO went on holiday, but he will be back in due time." Mustache haters, you've got your wish, but it sounds like it won't be lasting all that long.

"Baby face BIEB" is a pretty accurate description of his new look—aside from the tattoos he's collected since, the photo really could have been taken back in 2009, "One Time" on the radio and purple hoodies on Beliebers everywhere. And fresh-faced Bieber has two significant fans: His wife Hailey Baldwin, who commented, "yeeeeee" with a heart-eyes emoji, and his mom Pattie Mallette, who wrote, "Ya praise God."

In a recent interview with Apple Music's Zane Lowe, Bieber talked about his "reckless" behavior while dating ex Selena Gomez, who's spoken herself about being emotionally abused by the singer. "In my previous relationship, I went off and just went crazy and went wild, just was being reckless," he said, as Entertainment Tonight reports, before reflecting on his current relationship with new wife Hailey Baldwin. "This time I took the time to really build myself and focus on me, and try to make the right decisions and all that sort of stuff," Bieber said. "And yeah, I got better."

Related Stories
Justin and Hailey's Major Red Carpet PDA
Justin Defends All His Mushy Posts About Hailey
Emily Dixon Emily Dixon is a British journalist who’s contributed to CNN, Teen Vogue, Time, Glamour, The Guardian, Wonderland, The Big Roundtable, Bust, and more, on everything from mental health to fashion to political activism to feminist zine collectives.
This content is created and maintained by a third party, and imported onto this page to help users provide their email addresses. You may be able to find more information about this and similar content at piano.io
Advertisement - Continue Reading Below
More From Celebrity
John Travolta Talked Dancing With Princess Diana
Meghan Markle and Archie Speak to the Queen
Advertisement - Continue Reading Below
Who Is Alexandria Ocasio-Cortez's Partner?
Did Charles, Harry, and William Mend Relationship?
The Kardashians' Most Body-Confident Nude Shoots
Chrissy Teigen + Meghan Markle Spoke About Loss
Prince Harry Is Back in Cali With Meghan
Lizzo Just Shared an Unedited Naked Selfie
Queen Elizabeth's Stationery Breaks Tradition
The Queen Shares an Emotional Birthday Message