Taylor Swift has just released her eighth studio album, Folklore, and we're freaking! While the rest of us were hard at work making banana bread, Swift was making a stellar 16-song album, giving us songs to sing in quarantine and plenty of Easter eggs to majorly obsess over. In the "Cardigan" music video—that dropped Friday at midnight—she told fans, via comment section, that she purposely hid Easter Eggs throughout all the lyrics on Folklore. So prepare to go full Nancy Drew!

We went digging, and, Swifites, we finally cracked who "The Last Great American Dynasty" is about (no, not that Kennedy she dated): Rebekah Harkness.

Who Is Rebekah Harkness?

Harkness had quite the life according to The New York Times. The socialite was born in 1915 to a wealthy family in St. Louis, Missouri. She went to school in South Carolina and married an advertising photographer—but it didn't work out. So then Rebekah married big-shot oil tycoon William Hale Harkness.

The Harknesses shared a HUGE Watch Hill, Rhode Island mansion, called the Holiday House, that featured eight kitchens and 21 baths. "This arrangement effectively kept her from having to see her three children on anything like a regular basis," said the Times of the arrangement. (She would marry four times in total.)

In 1961, she became the sponsor of the late Robert Joffrey's small ballet troupe, until it folded in 1975. But she was also known for a bunch of other, not so pleasant, things, like dyeing a dog green, moving hundreds of thousands of dollars from one bank to another to confuse her accountants, and joking about her daughter's suicide attempt. Harkness died of cancer in 1982.

And this is where the connection to T. Swift comes in.

So, how does this all concern Swift? She bought that former Rhode Island home—yes, the one with all those bathrooms. Swift moved into Holiday House in 2013 for $17.75 million, and it caused some drama at the time.

Some people of the small beach community were worried Swift would bring more people (read: fans) to the quiet town, according to The Times. And since Swift is so, so famous, she naturally had to put up a ton of "No Trespassing" signs on the property that local citizens weren't too keen on. Not to mention, the governor of Rhode Island, Gina Raimondo, even proposed a tax at the time on second-homes worth more than a million dollars, otherwise known as the "Taylor Swift" tax. (It never actually happened, but still.)

"I wonder if Taylor Swift might like to hear the story of the time a body washed up on the beach under her Watch Hill mansion," wrote one reporter for The Day at the time of her purchase. "The product of a boating accident, not foul play." What a lovely welcome to the neighborhood!

The Proof Is in the Lyrics

In the song, Swift sings, "They picked out a home and called it 'Holiday House,' their parties were tasteful if a little loud."

"Rebekah gave up on the Rhode Island set forever/ Flew in all her Bitch Pack friends from the city/ Filled the pool with champagne and swam with the big names/ And blew through the money on the boys and the ballet."

Harkness had a ballet company! People, the clues, write themselves.

And of course, Swift was once known for her lavish parties, filled with all her A-list besties, Anyone remember her iconic Fourth of July bashes, complete with matching swimsuits, blow-up slides, and American flag cake? Sounds a bit like Harkness's parties if you ask us...

In the most telling lyrics, Swift directly compares herself to Rebekah and all the criticisms they both faced:

Swift took to Twitter this week to explain to fans how she produced her album. Influenced by her surroundings, specific images popped into her head, which eventually led her to writing multiple songs. "I found myself not only writing my own stories, but also writing about or from the perspective of people I've never met, people I've known, or wish I hadn't," the singer penned in her tweet.

So, it all makes sense! One Easter egg down, hundreds more to go. 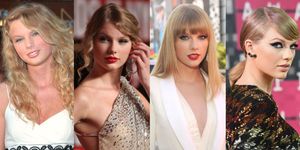 See Taylor Swift's Complete Beauty Evolution
Bianca Rodriguez Commerce Editor Bianca Rodriguez is the Commerce Editor/Writer at Hearst Magazines Digital Media, where she covers fashion, beauty, home, and more.
This content is created and maintained by a third party, and imported onto this page to help users provide their email addresses. You may be able to find more information about this and similar content at piano.io
Advertisement - Continue Reading Below
More From Celebrity
Sam Asghari Opens Up About Britney Documentaries
Prince Harry’s Memoir Is Concerning Royal Insiders
Advertisement - Continue Reading Below
Meghan Markle Wore Some Familiar Earrings in NYC
Harry and Meghan Could Visit England for Christmas
Meghan Markle Looked Gorgeous at Global Citizen
Harry and Meghan Are Taping Their NYC Trip
Keep an Eye on Lady Louise Windsor
Princess Beatrice's Daughter May Get a Royal Title
James Middleton’s Wife Thought He Was a Waiter
Meghan Markle Got a New Nickname