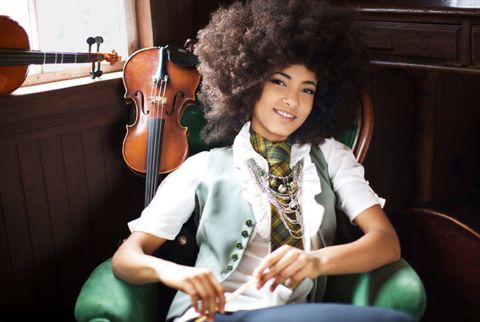 She grew up in a gang-ridden corner of Portland, Oregon, with a single mother who worked several jobs. After a stray bullet flew into a neighbor's home and killed a child, she started sleeping on the floor. Then Mister Rogers came to the rescue: One day on his show, cello virtuoso Yo-Yo Ma performed — and Esperanza Spalding was inspired. Her mother enrolled her daughter, then 5 years old, in a free community-band program, and Esperanza tackled the oboe, the clarinet, the violin. By age 15, she was the concertmaster for an Oregon youth orchestra, with a scholarship to a private arts high school. At 20, she graduated from the Berklee College of Music in Boston, while performing as a bassist and singer in bands around town. By 25, she had released three albums. This year, at 26, she became the first solo jazz musician ever to win the Grammy for Best New Artist. She took a break from her tour of Africa and Europe to talk about what's next.

Your childhood sounds pretty rough. Did you ever picture yourself where you are today?

I grew up in a bad neighborhood, but since leaving Portland, I've seen neighborhoods that are worse, almost like war zones — traumatic and stressful, they break down the spirit of a person. While mine was certainly not the best neighborhood, it was like a walk in the park compared with other ghettos I've seen. I grew up with an incredibly loving and supportive family that gave me the impression there were a lot of options for me out there. My mom always tried to put things in a larger social context: These men in our neighborhood aren't bad people, not bad guys — they're people who have been stripped of all opportunities. This is what they feel they have to do, to be a part of something or to be a man. It's not fun to be around it, but I knew we were gonna be OK. It didn't define our existence.

Did you think you'd win the Grammy?

Oh, you never think something like that, at least not that Grammy. I could see getting nominated for some arrangement on one of my records, in the categories that aren't seen on TV. But certainly not for Best New Artist. It was completely out of nowhere when I got the nomination. I was like, What? Really? What happened? Whoa.

While Bieber fans were hacking your Wikipedia page and telling you to "die in a hole" on the night you won, what were you doing?

Partying with Prince. Whenever I'm in town and I can, I'm hanging with him wherever he is. I brought my family with me this time since they had never met him and I talk about him so much.

You've been jamming with him for several years, ever since you sent him a demo. But what's a Prince party like?

Oh, he always has a jam session at his parties. Actually, it's not really a jam session — the jam sounds more like a record; his band is so tight. His parties are full of people who love Prince and love music. That's what it's like every time.

You play about 150 concerts a year and have performed for President Obama three times. Now you're on a world tour — while also working on a new album. When do you sleep?

Amazingly enough, I have all the time I need. I don't watch TV, I don't spend time on the Internet, and I don't party much. I don't text very much, either. I ask my friends to please call me. I try to keep the phone calls short, keep the e-mails short. If I choose to use it productively, there's enough time to do everything I need to do.

The Internet can be a real time suck.

It's like any tool — it's about how we use it. When you do use it, do you know what you're using it for? The Internet isn't inherently bad or time-sucking. There's enough time in the day: If you go to bed at 10 and start your day at 6, there's a lot you can do in a day! An hour is so much time; a focused 20 minutes is so effective. Sometimes I'm practicing and I'll think I'm halfway done, then realize, damn, it hasn't been 20 minutes yet? If you try to squeeze as much goodness into your time as you can, you'll be amazed at the results.

So you do make time for a TV show.

I watch while I'm brushing my hair. I'm never doing nothing. If it's been a couple nights since I've brushed my hair out, I put on nbc.com, and I take those 20 minutes and brush out my hair. It's not time that's totally lost. I do something productive, and I get my guilty pleasure at the same time!

How many songs are on your iPod?

Too many. It's not right. It's like more than I can actually listen to. I like this band Little Dragon now. Earth, Wind & Fire; Jimi Hendrix; Dave Holland — that band is awesome. George Walker; he's a classical composer. He's really special. I've been listening to his trombone concertos. Jaki Byard. Really beautiful music. Whatever catches my eye. The list goes on and on. Different days command different music. If I really like a record, I'll keep listening to it. I'm still listening to a record I got in November called Music for the Fifth World. That's gonna be on there for a while. That's how it goes.

You've complained that when a female jazz artist is good, people say she's "like a dude."

People are more used to seeing men who are masters at an instrument than women. When people say, "Oh, she plays like a dude," it's usually dudes who are the ones saying it. They're saying, "Oh, she's as good as us." Of course, that's a stupid statement. It's totally stereotypical to say, "We have an advantage on this, and if anyone else can do it well, it's only because they're like us." I think more men are starting to learn that this attitude is totally hollow and based in imagination. As more women are involved in music, this kind of thing gets said less and less.

What kinds of music did you listen to as a kid? How did you get into jazz?

Oh, I listened to all kinds of stuff, shoot. A lot of classical music. I loved the oldies station. My mom thought the other stuff wasn't good for my brain. But I would hang out at friends' houses and listen to the radio, so I also liked all the stuff that people my age were liking — Janet Jackson, LL Cool J. I was digging that along with the oldies, or what I thought were oldies: Motown and British rock bands from the '50s, '60s, '70s. Once I picked up the bass, I started listening to jazz. It was like, whoa, things clicked. It started to seem like, oh, this is really something. I could become good at this.

In elementary school, you got pneumonia and had to be homeschooled, so you basically taught yourself. That takes a lot of discipline.

Actually, the learning part was fun. I had been excelling in school, but I didn't miss the social mess and drama. I think there's so much negative influence on children in school settings. It becomes learning by rote to pass a test. It's not contextualized. My mom was really good at making things seem interesting.

She is. She took the time to ensure that my brother and I got a good education and were being fed with love. She had the endurance and willingness to push through, work hard, and provide for her family. My story isn't unique — it's common, particularly in our country: Most people are going through real nose-to-the-grindstone surviving. These people are heroes — it's incredibly trying on the body and spirit to survive. You just keep going.

You know, I have a funny parable from this morning. My boyfriend and I went for a walk: He wanted to climb up a mountain outside of Cape Town. We started climbing, and it seemed kind of dangerous, and I was getting really nervous. He kept saying, "Let's just make it to the top!" I stopped like three quarters of the way up and said, "No. This doesn't seem safe. Let's go back." He said, "No, no, no, let's get up there, and then we'll see how to get down!" Now, going back down the way we had come actually would have been dangerous. But we got to the top, and we saw a path up there that actually was the safest way down. From the top of the hill, we had the best perspective. That really happened today! On the way down, I was laughing — I can't believe I was that person who wanted to stop three quarters of the way up.

Abigail Pesta Abigail Pesta is an award-winning journalist who has lived and worked around the world, from London to Hong Kong.
Advertisement - Continue Reading Below
More From Celebrity
Kim Seemingly Tried to Kiss Kanye on a Kiss Cam
Ashley Graham Continues to Spread Body Positivity
Advertisement - Continue Reading Below
'Bachelor' Victoria F. & Peter's Ex Had a Fight
Watch Meghan Attend the Ballet with a Puppet
Luna Holds Petey the Puppy in the Cutest Video
Kim K and Paris Hilton's '00s Throwback Photos
Irina Walked for Burberry in Your Dream Coat
Reese and Ava Have Never Looked More Alike
Royals Share Rare Look Into Palace Refurbishment
Katie Holmes Casually Does Handstands in a Bikini