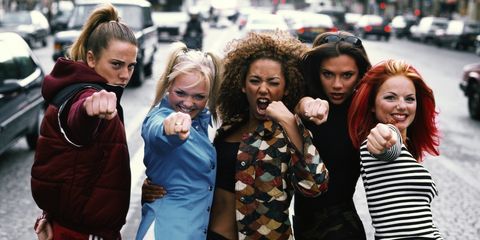 News that the Spice Girls might be reuniting shook the world, as did Victoria Beckham's revelation that she would not be going on tour with the gang ever again. But fans of the group need not despair, as it's now been revealed that the Spice Girls will reunite for a new movie, and this time they'll be superheroes!

Related Story
The Spice Girls Are Performing at Royal Wedding

According to Variety, the Spice Girls reunion is on, but it's taking a slightly different form than expected. Instead of going on tour, all five original members of the group will voice their own characters in an animated movie.

Variety reports that, according to a source, "all five members of the group have signed off on their likenesses being used for a superhero-themed movie working off of the 'girl power' message. Each character will be voiced by a Spice Girl... and feature a 'girl power' unique to that group member that reflects each girl’s personality." This is literally the best news anyone's had all week.

The source also revealed that all five members of the group are "fired up about the idea," which is unsurprising seeing as they reunited on International Women's Day to discuss new projects. The fact that the animated movie would inspire young women everywhere, and showcase five strong female role models, is right on-brand for the Spice Girls.

Clearly, the successful group has major plans, with Variety's source adding, "The Spice Girls are thinking big in terms of a franchise on a global scale. They’re the most successful girl group on the planet. It’s just what Marvel or Disney needs."

Related Story
50 Surprising Facts About the Spice Girls
Amy Mackelden Weekend Editor Amy Mackelden is the Weekend Editor at HarpersBAZAAR.com, where she writes about entertainment, celebrity news, beauty, and fashion.
This content is created and maintained by a third party, and imported onto this page to help users provide their email addresses. You may be able to find more information about this and similar content at piano.io
Advertisement - Continue Reading Below
More From Music
Reese & Ryan's Son, Deacon, Drops His First Single
Life Advice From an Icon, Cher
Advertisement - Continue Reading Below
J.Lo Is Basically Naked on Her New Single Cover
Karaoke Songs Anyone (Yes, Anyone) Can Rock
Um, This Dude Claims Lady Gaga Stole “Shallow”
Sad Taylor Swift Is the Best Taylor Swift
Jennifer Lopez's NYC Concert Was Evacuated
Miley Cyrus Channels Britney Spears' Iconic Look
Ginger Spice Apologizes for Leaving Spice Girls
Fans Walked Out of the Spice Girl's Reunions Tour