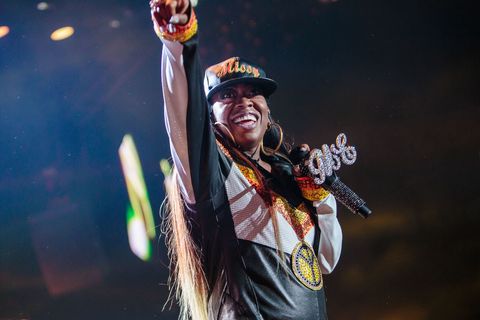 It's 2017, and only now are we realizing some of the things we missed in the most beloved songs of the early aughts. Case in point: it took 15 years for us to realize that in "I'm Real," Jennifer Lopez sings, "R-U-L-E" in response to Ja Rule saying, "What's my mother-f**kin' name?" For over a decade, we had all labored under the assumption that she was saying, "Are you Ellie?"

Now, one Twitter user has solved another great mystery of the top hits of the 2000s. Remember Missy Elliot's "Work It"? Of course you do.

In the chorus line, she repeatedly says, "Is it worth it? Let me work it. I put my thing down, flip it and reverse it," followed by what sounds very much like total gibberish. If you listen to it now (the first instance is at the 00:30 second mark in the video above), it sort of sounds like she's speaking so fast that you just can't understand what she's saying.

But now, Twitter user @Mia143 has realized that SHE ACTUALLY FLIPS THE LINE AND REVERSES IT:

She shared this revelation on Twitter and, understandably, people's minds were blown.

it should've never took us 15 years to realize that , I need a moment to grasp onto this pic.twitter.com/ir3kJRSDy1

One thing's for sure: