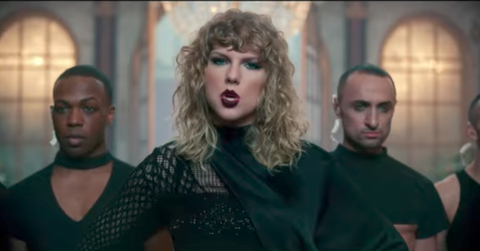 At the 2017 MTV Video Music Awards, Taylor Swift premiered the music video for her new song, "Look What You Made Me Do." Featuring many different sides of Taylor over the years—including a montage in which Taylor mocks her past selves—the video also received several different kinds of responses from fans all over Twitter.

The #LWYMMDvideo is out NOW!! Watch it on repeat with us allll night 👉 https://t.co/dDNf0VtOPW

Some Taylor fans absolutely loved the video and say it was worth the wait.

Congratulations in advance to @JosephKahn and @taylorswift13 for winning all of the #VMAs next year for #LWYMMDvideo.

IDK IF I'M EVER GONNA BE ABLE TO BREATHE AGAIN #LWYMMDvideo

TAYLOR EVEN MOCKED THE MEDIA for her "squad goals" - now she really ended everyone, people. 🐍🚨👏🏽 #LWYMMDvideo pic.twitter.com/Rr9Whknu64

OMG ZOMBIE TAYLOR IS EVERYTHING #LWYMMDvideo

Other fans, though, found the video hilarious and took it as an opportunity to do a little mocking of their own.

Taylor Swift is Amy from Gone Girl levels of extra.

Taylor Swift has the creepiest obsession with Katy Perry

Taylor Swift gave us what the country needed: a gothic fantasy where an Aryan beauty violently reclaims what she thinks she's owed

Love it or hate it, Taylor is back, and she has been listening to all you jokesters on Twitter. Watch out.