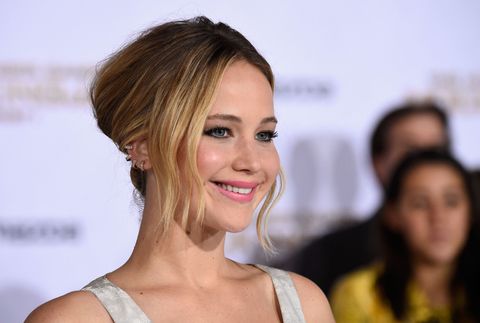 Hollywood has a major gender pay gap problem—this we know. The good news? Forbes has revealed that Jennifer Lawrence was the highest-grossing actor of 2014. Period.

Over the past year, Lawrence's films, including Mockingjay: Part 1and X-Men: Days of Future Past, raked in an astounding $1.4 billion. And let us not forget American Hustle, which was a huge commercial and critical success (and in which, not-so-fun fact, Lawrence and Amy Adams were paid less than their male co-stars).

While there's more transparency than ever concerning the wage disparity, today's news is the perfect reminder that Tinseltown needs to pony up for the women who drive box office sales just as much as—if not more than—their male counterparts.

But let's take a second to bask in the glow of knowing that our girl Lawrence is Hollywood's biggest breadwinner at the ripe old age of 24 and is currently topping the Billboard charts, to boot.

New Study Shows Another Disappointing Fact for Women in Hollywood

Lauren Valenti Associate Web Editor I’m the associate web editor at Marie Claire.
This content is created and maintained by a third party, and imported onto this page to help users provide their email addresses. You may be able to find more information about this and similar content at piano.io
Advertisement - Continue Reading Below
More From Celebrity
Rihanna Takes Out the Trash on Trump's Last Day
Chrissy Teigen Shared a Moving Post About Sobriety
Advertisement - Continue Reading Below
Meghan's Royal Aides to Testify in Her Court Case
Greta Thunberg Hilariously Trolled Trump—Again
Watch Demi Perform During Biden's Inauguration
Joe Biden Follows Chrissy Teigen on Twitter
J.Lo Wore Head-to-Toe Chanel for the Inauguration
The Queen Sent a Private Message to Joe Biden
Lady Gaga's PDA with Boyfriend Michael Polansky
Twitter Reacts to Lady Gaga at the Inauguration