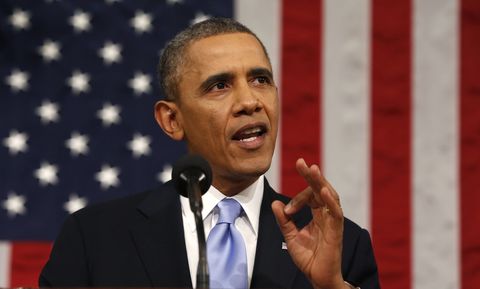 As an introduction to Katy Perry's Grammys performance with domestic violence survivor Brooke Axtell, President Obama delivered a message in which he called on artists to use their "unique power to change minds and attitudes" and put an end to rape.

"It's on us—all of us—to create a culture where violence isn't tolerated, where survivors are supported, and where all our young people—men and women—can go as far as their talents and their dreams will take them," he said in the recorded public service announcement.

The video is the latest effort of the White House's "It's On Us" campaign, which aims to end sexual assaults on college campuses. Since the program's launch in September, students from more than 200 colleges and universities, several collegiate sports organizations, and celebrities have participated in the campaign.

Is the Red Lip Dead? The Grammys Say So

See Every Look from the 2015 Grammy Awards Red Carpet

The Celebrity Shoe Game Was Strong Tonight on the Grammys Red Carpet
Chelsea Peng I'm Chelsea Peng, the assistant editor at MarieClaire.com.
This content is created and maintained by a third party, and imported onto this page to help users provide their email addresses. You may be able to find more information about this and similar content at piano.io
Advertisement - Continue Reading Below
More From Celebrity
Charles Expertly Ignored Boris Johnson's Snafu
How Kitty Spencer's Wedding Dress Honored Diana
Advertisement - Continue Reading Below
Dolly Parton On the #FreeBritney Movement
Will & Kate Are Nervous About George's Future
George Won't Be Forced to Go to Boarding School
Diana Would Have Written a Memoir Too, Friend Says
A Slice of Diana's Actual Wedding Cake Is For Sale
Matt Damon Trolled Ben Affleck and Jennifer Lopez
This Old Video of the Queen Saying "Nah" Is LOL
Diana Had a Secret Message on Her Wedding Shoes