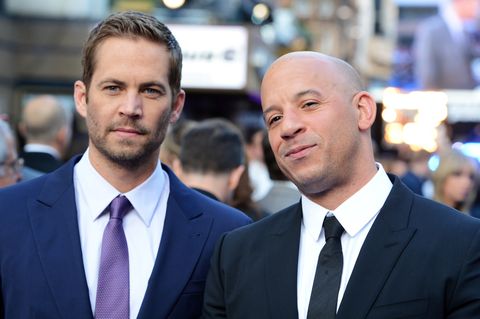 Brace yourselves, people—we know this is a lot to handle on a Monday morning. But while visiting the Today show earlier today, Vin Diesel revealed that he named his newborn daughter after his former Fast & Furious co-star and "brother" Paul Walker.

"While I was in the hospital, the name that I will give you is... I named her...I named her Pauline," an emotional Diesel, 47, told Natalie Morales. "There's no other person that I was thinking about as I was cutting this umbilical cord."

Diesel and his girlfriend Paloma Jimenez welcomed their daughter earlier this month. They have two other children: Hania, 6, and Vincent, 4.

"I just thought...I knew he was there and it felt like, you know, a way to keep his memory a part of my family and a part of my world," Diesel said of his friend, who died in a tragic car accident in November at the age of 40. The latest installment of the Fast & Furious franchise—Furious 7—was still being filmed, and Walker's brothers Cody and Caleb stepped in to help finish the movie after Walker's death.

"It was in some ways the hardest movie I ever had to do because the relationships that you see on film are so real," Diesel recently told audiences at SXSW. "When the tragedy happened, I lost my best friend. I lost my brother."

Ugh, where are the tissues?!

Samantha Leal Senior Web Editor I'm Sam, the senior editor at MarieClaire.com.
This content is created and maintained by a third party, and imported onto this page to help users provide their email addresses. You may be able to find more information about this and similar content at piano.io
Advertisement - Continue Reading Below
More From Celebrity
Alicia Silverstone Got Banned From a Dating App
The Queen Just "Reluctantly" Canceled a Trip
Advertisement - Continue Reading Below
Adele's Album Will Feature a Sensitive Voicemail
Selena Gomez Just Debuted a Sleek Bob
Zendaya Looked Incredible at the 'Dune' Premiere
Kate Middleton Is Helping Tackle Addiction
The Queen Was Advised to Stop Drinking for Now
Scott Disick Is "Not Happy" for Kourt and Travis
Emma Watson Stunned at the Earthshot Prize
Kate "Didn't Have Much Energy to Bond" With Meghan