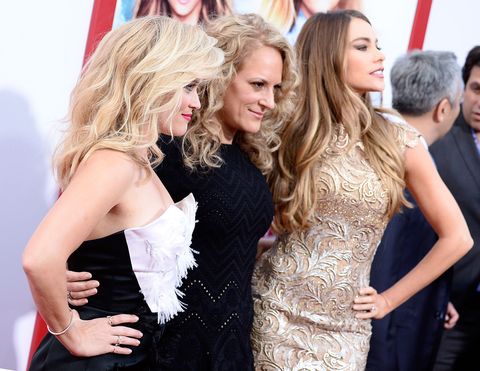 Anne Fletcher is a bona fide Hollywood success story. The choreographer-turned-director is one of the only female comedy directors out there. Hell, she's one of the very few female directors out there, period. Directing The Proposal, 27 Dresses, and Step Up, the Michigan-native is prepping for her next debut—Hot Pursuit, a comedy starring Reese Witherspoon and Sofia Vergara.

We caught up with the 49-year-old HBIC to get the scoop on the film, how she made the jump from choreographer to director, and what she thinks about women in the industry.


You've made a very interesting career move from a choreographer to directing. How did that all happen?

"It all focuses on my very good friend Adam Shankman. I worked for and with him, as he made the move from choreographing to directing films, and as he did that I would kind of take over the choreography for a lot of his films. After awhile, I got really close with certain producers and directors and studio heads—and Shankman said, you know, you really need to be directing. And so when a studio exec asked for directing recs, my name came up. And thank god it did. I love it. I'm having the best time of my life. I remember my first meeting wtih Eric Feig, who was at Summit at the time, now Lionsgate, and I overly prepared. Usually those meetings last an hour, mine lasted three hours. And I still had an hour of material left! I knew that there was no way I was going to not be overly prepared. This was going to be the first and only meeting I was going to have about directing my first film. I didn't want to leave with egg on my face. And two months later, I got the gig."

How does choreography inform directing? Or does it?

"I've been incredibly fortunate to have loyal and good people around me. I think the lessons that you learn on the set, even if you aren't aware that you're learning them, you take those with you—lessons on genres, directors, producers, style. I learned how to be around different actors, the ones who have been in the biz for a million years to the ones who are totally green. You know, in dance and in film, there's a character's arc. There's a reason that the dance is happening, and I translate that into directing."

"My knee-jerk reaction was to say, 'Go ask the director.' And then I was like, oh, right. That's me."

What was it like when you had just started out?

"Well, I remember my first day on Step Up, I had someone come up to me—I think it was a production designer if I remember correctly—and he asked me whawt color something should be. And my knee-jerk reaction was to say, 'Go ask the director.' And then I was like, oh, right. That's me. So I have to choose. And that was a moment of like, oh, this is happening.

Do you have a signature style? Is there anything you bring to each and every film you work on?

"That's hard. I think you could probably say physical comedy. But I also think that the tone of my movies, there's always a lighthearted, fun element. Even in dramatic films, there's a love, there's a happiness. I love watching movies that make me happy, even if they're drama, even if they're horror. Wes Craven, he had a way with horror films that even though it was crazy or scary, it made you smile. That's what I hope to do."

What made you want to direct Hot Pursuit?

"It was a few things. One, I really knew and understood that the pairing of Reese and Sofia together was going to be amazing. They're such smart, funny women and they had this intense chemistry where they just got on so well. They had this synergy on screen, and for me, that's a dream come true. Two, I love the idea of the female buddy comedy, where it's not just throwing women into a typical male genre. I wanted to explore what's funny about two women in here and how does that play itself out. Sometimes, I feel like we've tried to do male-type movies with women, and have women act like men, and it feels awkward. Yes, we can be raunchy. There are women who are totally in their element when playing to that. But we have different levels of funny. We're layered, we have so many things going on. And I just thought, I want this to feel different than just putting women in male roles. Women *are* funny."

How do you feel you played to that—the idea that women are inherently funny and don't need to play traditionally male roles?

"Two of the standout things, was there's a scene where the two characters use their period to get out of a situation. It might sound, like, oh god, women equal periods, but men just don't want to talk about that. It's really true. So they use that to get out of a dangerous situation. In another situation, they use a male fantasy to get away from a guy who is threatening them with a gun."

What stood out to you about Reese and Sofia?

"Reese is a solid, dramatic, comedic actor—she just encompasses these people and finds their hearts and humor. And Sofia, we've really only seen on Modern Family, and her comedic sense and her awareness of comedy, it's just embedded in her soul. It was amazing. This package had the innate ability to be funny."

Switching gears, you're one of the most talked about directors out there, and you happen to be female. What are your thoughts on the
lack of female filmmakers
?

"It's a very big subject, for sure. Thankfully, I've never experienced sexism in the industry myself, but I have to acknowledge that other women have and do. There aren't enough women here. There aren't enough women of all ages, in different roles, on the floor and behind the camera, there aren't enough. Period. I believe we're just scratching the surface, and it's definitely changing. More women are coming up as directors, producers, and writers, and in fact, many women are creating these roles for women. Reese looked around and said, you know, there aren't enough of these cool stories being told and just created her own production company. She's nailing it out of the park. This year alone, I think there are so many more female-driven movies and it's an incredibly exciting year of women, and I just hope it continues to grow. There are so many incredibly talented women out there. So many, and you know, we're more than half of this population. We need things to watch! We want things that resonate with us. But I think the climate has changed, and it will hopefully continue to do so."

What's next? What projects do you have coming up?

"Oh man, I don't...I need some time to recharge. I don't like thinking about my next project until one is pretty much over. How about...an all-male reboot of Steel Magnolias? I think that will be amazing. [laughs] No, but I have a couple of things in development. You know, it's funny, at the end of every movie I think you change. You figure out what stories you want to tell and you sort it out and it's kind of like starting new each time. So I'm excited to take a minute and then...see what's next."

Sigh: There Are Fewer Female Movie Directors Now Than There Were in the '90s

Samantha Leal Senior Web Editor I'm Sam, the senior editor at MarieClaire.com.
This content is created and maintained by a third party, and imported onto this page to help users provide their email addresses. You may be able to find more information about this and similar content at piano.io
Advertisement - Continue Reading Below
More From Celebrity
Watch Demi Perform During Biden's Inauguration
Joe Biden Follows Chrissy Teigen on Twitter
Advertisement - Continue Reading Below
J.Lo Wore Head-to-Toe Chanel for the Inauguration
The Queen Sent a Private Message to Joe Biden
Lady Gaga's PDA with Boyfriend Michael Polansky
Twitter Reacts to Lady Gaga at the Inauguration
Lady Gaga Gave a Powerful Inauguration Performance
Lady Gaga Brings the Drama to D.C.
Chrissy Accidentally Spilled Inauguration Secrets
Meghan's Lawyers Slammed Publication of Her Letter