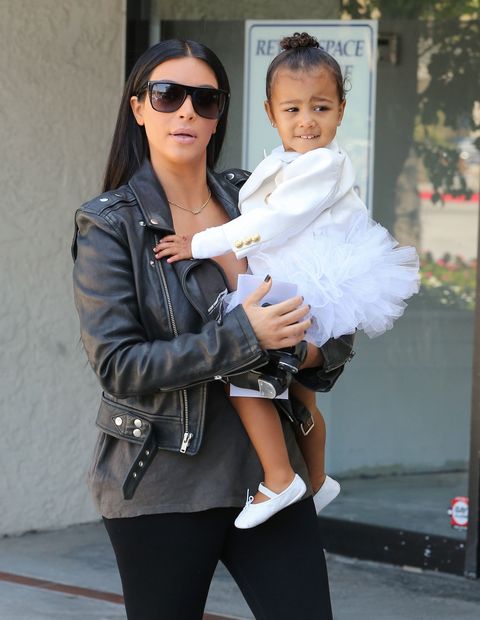 Update, 6/17: For her daughter's Disneyland birthday celebration, practical mom Kim Kardashian wore an unexpectedly pedestrian outfit of black leggings, a black tank, and some $200 sneakers that are so *avant garde* you can't even buy them yet.

Here is The Creator himself wearing his sweatery Yeezy Boost 350 Sneakers, which aren't available to the public until June 27.

Other occurrences at Disneyland on June 15: a selfie.

Quoting a personified effigy made from tiny particles of frozen water.

And some parents blowing out their kid's candles.

Update, 6/15: As she enjoys a completely run-of-the-mill birthday outing at Disneyland, North West has given *us* the greatest gift of all: a video of her dancing to "Black Widow." In a white onesie. And the tiniest Timbs known to man.

I had to sneak Sophia into the hospital the day you were born and I knew that the two of you would be trouble together lol. Love the dance moves. Happy Birthday North we love you so much 🎈

Thanks, Nori. May you continue to develop fine motor skills and a full range of motion.

Update, 6/5: A representative has confirmed that Disneyland *will* be open June 15 as a regular business day, meaning North West will be a normal, totally inconspicuous kid all the other kids' parents gawk at. The park does host private parties, though, so at least she can have her Carvel in peace.

Happy birthday to my sweetest Minnie Mouse! Thank you Disneyland for the most amazing day! I will post more pics later today was a busy day!

Original post, 6/5: We all know Balmain-wearing toddler North West is not your average almost two-year-old, but this takes the cake (literally): According to OK! magazine, her parents Kim Kardashian and Kanye West are reportedly renting out Disneyland for her June 15 birthday.

Last year, she celebrated with a Kidchella-themed party held in Auntie Kourtney's backyard, so this is 1) quite an improvement and 2) perhaps compensation for when she'll have to share her mom and dad's attention with one/two little brothers/sisters in a few months. Plus she's already done a test for the makeup, so that's all set.

The Magic Kingdom comes highly recommended. Ryan Gosling and Guillermo del Toro chose the theme park's Cars ride over the Oscars, and judging by their gleeful faces, they had no regrets.