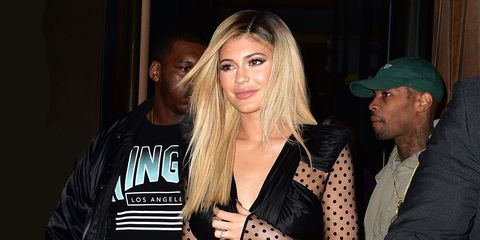 It's hard to do, but Kylie Jenner stunned the usually unflappable New York Fashion Week crowd with her front row appearance at Prabal Gurung's show this weekend. Channeling Brigitte Bardot hair and wearing a paint-splattered pantsuit by the designer himself, Jenner wasn't there to watch big sister Kendall (who did not walk the runway), but to make a bold fashion statement of her own.

Does the 18-year-old have industry aspirations?  "I do," she told Marie Claire. "My sister and I are working on a new clothing line, which will launch the beginning of next year."

The new line represents Jenner's latest foray into fashion, following her recently launched website, which features outfit analysis, makeup tutorials, and plenty of NYFW photos.  The two sisters had previously collaborated on labels with Topshop and PacSun, but Jenner told us she's "very excited" about her new venture because unlike their prior collaborations, this new eponymous line gives them unfettered creative freedom.

"I think acting would be really, really fun."

Even as she joins the family business, Jenner has bigger goals:  "I think acting would be really, really fun," she says.

"This is only my second show this week—I really love Prabal," Jenner told us. And there was much to love about Gurung's show, which featured a series of exquisite, ephemeral dresses inspired by the robes worn by Buddhist monks of Gurung's beloved homeland, Nepal.

In fact, the show opened with dozens of monks gathered on the runway to chant a deeply moving prayer of gratitude to the United States and the fashion industry for supporting the reconstruction and humanitarian efforts led by Gurung's foundation after the country's devastating earthquake earlier this year.

"We raised over a million dollars and have started building shelters, hospitals, and schools," Gurung told Marie Claire.  "It's a lifelong commitment for me.  The fashion industry has given me a platform to talk about Nepal and the people in it were the first ones to come to our aid.  This was our way of thanking them."

This content is created and maintained by a third party, and imported onto this page to help users provide their email addresses. You may be able to find more information about this and similar content at piano.io
Advertisement - Continue Reading Below
More From Celebrity
Matthew Perry Deletes 'Friends' Reunion Instagram
Charles is Looking Forward to Seeing Harry Again
Advertisement - Continue Reading Below
Will & Harry to Walk Together at Philip's Funeral
Beyoncé Wore Tweed Micro Shorts for Date Night
Kristen Stewart's GF Gushed About Her on Insta
Prince Charles Addresses Prince Philip's Death
Prince William Pulls Out of 2021 BAFTA Appearances
J.Lo Wears a Crop Top and Gold Joggers on Set
Prince Philip Said He Had No Desire to Live to 100
JT Is in the Throwback Pic Britney Posted on IG