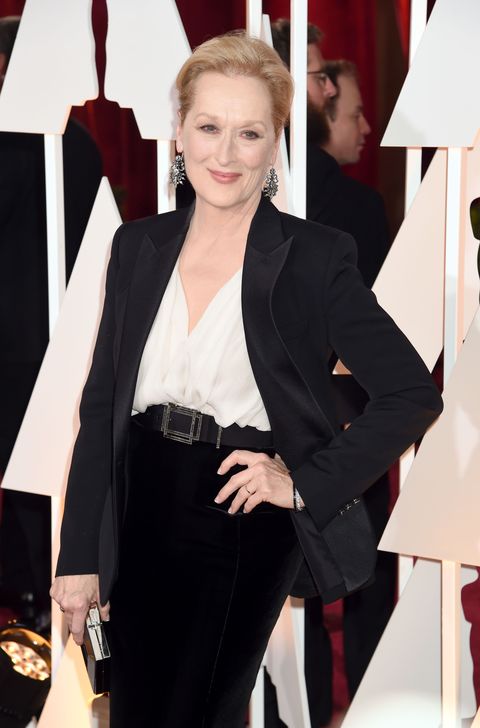 Meryl Streep plays an early feminist hero fighting for the right to vote in the new movie Suffragette. But Streep, who is actually a feminist hero in her day-to-day life, says she'd prefer not to be identified by the f-word. Yes, really.

In an interview with Time Out London, Streep, who's promoting her role as British icon Emmeline Pankhurst, was asked, "Are you a feminist?" Her response: "I am a humanist, I am for nice easy balance." It's not like Streep said she doesn't believe in equality for women, but she did shy away from proudly aligning with the feminist movement.

It's confusing why she'd avoid using the word feminist, considering her actions are almost consistently feminist. This is a woman who sent letters to every member of Congress demanding they pass the Equal Rights Amendment, and set up a fund for women screenwriters over 40. Even in the same interview, she called out Hollywood for being too male-dominated. "People at agencies and studios, including the parent boards, might look around the table at the decision-making level and feel something is wrong if half their participants are not women," she said.

Let's just chalk this up to a slip of the tongue, because if we don't, we have to disqualify Streep's amazing speech in honor of Emma Thompson last year. She called her fellow actress "a rabid, man-eating feminist, like I am." And that's a character trait worth celebrating.

This content is created and maintained by a third party, and imported onto this page to help users provide their email addresses. You may be able to find more information about this and similar content at piano.io
Advertisement - Continue Reading Below
More From Celebrity
Selena Gomez Is Drenched in Fake Blood on Set
Amanda Seyfried Talked About Having Panic Attacks
Advertisement - Continue Reading Below
Harry Arrives in the U.K. For Philip's Funeral
Matthew Perry Deletes 'Friends' Reunion Instagram
The Queen's Corgis Are Helping Her With Her Grief
Charles is Looking Forward to Seeing Harry Again
Will & Harry to Walk Together at Philip's Funeral
Beyoncé Wore Tweed Micro Shorts for Date Night
Kristen Stewart's GF Gushed About Her on Insta
Prince Charles Addresses Prince Philip's Death