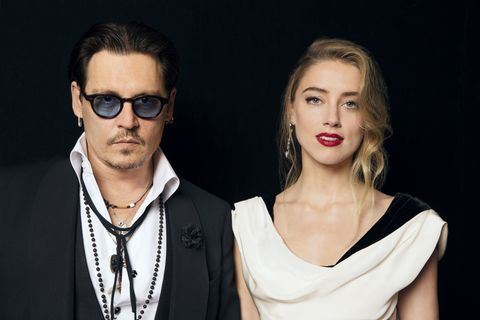 Without naming names, the internet's response to Amber Heard's domestic abuse allegation against Johnny Depp has been somewhat disappointing. Headlines pertaining to Heard's bisexuality, coverage of her smiling post-restraining order, and concerns about her being a "gold digger," are subtly working to discredit her claim—and now she's being cast in the "manipulative crazy girl" role by Depp's friends.

The Alice Through the Looking Glass star has experienced a surge of support over the past few days, mostly from a group of celebrities who don't believe he's capable of abuse. And while having an opinion about your friend is totally fair, writing an opinion piece masquerading as fact is not. Neither is stating that Heard is "manipulative" simply because Johnny Depp told you so.

In a "guest column" published by The Wrap (and titled "Johnny Depp Is Being Blackmailed by Amber Heard—Here's How I Know"), Depp's buddy Doug Stanhope alleged that he "watched [Amber] manipulate and f—k with him for years" and that Depp said she was "threatening to lie about him publicly in any and every possible duplicitous way if he didn't agree to her terms."

Heard's lawyer responded to Stanhope with the following: "Allegations against Ms. Heard are absolutely and unequivocally false...[The letter] has no basis in reality and is nothing but the typical celebrity muckraking for profit...It is highly offensive and disturbing that you would choose to publish it in the first place."

Stanhope's piece basically claims that Johnny Depp felt manipulated and emotionally blackmailed, and yeah, those are pretty common feelings to have when going through a super awful breakup. The fact is, none of us know for sure what happened between them. But we do know this: presenting Depp's feelings/worries/concerns as "proof" of his innocence is irrelevant at best and irresponsible at worst.