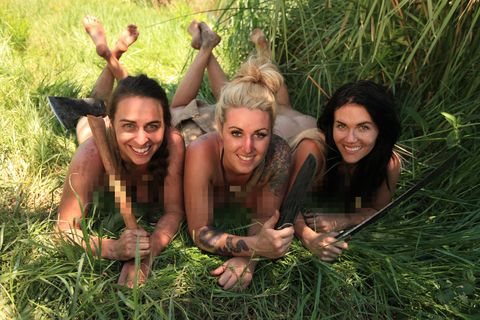 On the surface, Naked and Afraid XL is reality television voyeurism wrapped up in an irresistible bow. The show serves more drama than The Real Housewives, and has one surprising quality that audiences love: it's totally unscripted. Which brings us to what lies beneath the surface of Naked and Afraid: the very real, very raw personal struggles and of its cast members, a group of 12 men and women who spend 40 days trying to survive in remote South Africa. Oh, and they're naked.

MarieClaire.com spoke to cast member Tawny Lynn to get an inside look at one of the most visceral shows on reality TV—and no subject was off the table. From the group's unlikely bond with their camera crew, to wilderness gender dynamics, to on-screen nudity, Tawny dished. And yep, we definitely asked her the question on everyone's mind: does the cast hook up off camera?

Marie Claire: One of the reasons people love this show is because it can be really, really dramatic. It's understandable: humans are at their worst and best when vulnerable. Was there drama during the 40-day challenge?

Tawny Lynn: We had a really good group. We never had any serious issues. When you're out there for that long, starving, you're gonna get pissed at each other every once and a while. But we were a strong team, and I was happy with who I was out there with.

MC: You prepared for this, but what physical and personal hurdles happened that you just didn't expect?

TL: I wasn't prepared for the feet. When I was in Florida for my first Naked and Afraid challenge, I had no issues with feet. So, I went into Africa thinking: "I got this, my feet are solid." I couldn't have been further from reality. My feet got destroyed. Emotionally, leaving my daughter for the second time, and knowing how strongly she felt about that, was something I didn't expect to hit me so hard. I was blessed to have other mothers with me, they were good about consoling me and encouraging me.

"Being out there in 103 degree weather and not eating for days at a time breaks you down on every level."

MC: Did you reach any emotional breaking points?

TL: When you're severely malnourished and away from everything you love, you become so emotionally vulnerable, and the slightest thing can make you burst into tears. And that's not normally me. It's amazing, the effect it has on you. There are things that happened that make you cry at the drop of a hat. Like, "oh my god, we got a meal." We all cry. Anything that would normally not make me cry, made me cry. Being out there in 103 degree weather and not eating for days at a time breaks you down on every level.

MC: It must be so weird to be unclothed and roughing it with a totally chill film crew watching you. Do you interact at all?

TL: We definitely had a bond with the film crew, because they were experiencing everything with us. There's not a huge interaction because that limits our experience as survivalists, but if you're running through the river being chased, they're running with you because they have to capture that moment. There's a bond. But sometimes, you get to the point where you're irritated with them because they just had a big dinner and slept in a comfortable bed.

MC: Okay, I'm going to ask the question on everyone's mind: do people hook up on the show? There must be such a strong need for companionship.

TL: Within the Naked and Afraid survivalist group, there are rumors about it. I can't confirm or deny that it does or it doesn't happen.... In my experience, it didn't.

MC: Honestly, how long did it take you to get over being naked and so exposed?

TL: It's really uncomfortable to strip down naked with people standing around watching. It goes out the door so quick, the heat hits you, your feet are on hot ground. You're not worried about how you look. You're worried about finding water and shelter. And this is coming from someone who is very conservative, and my biggest fear going into this originally was being naked.

MC: Why was that your biggest fear?

TL: I don't like to present myself that way. I'm very conservative. I don't think it's appropriate for women to expose themselves like that.

MC: It seems like being in such a primitive situation would either bring about a real gender divide, or totally shatter the one that already exists. Which happened?

TL: In certain situations, there was a divide. When it came to taking down bigger game, the men were insistent upon "we're gonna handle this." And the women, we want to be a part of everything, too. In that survival situation, tensions rise because we don't want to feel like the lesser of the group.

"Being homeless at a young age built a mental strength within me that made me able to take on anything."

MC: You were briefly homeless as a teen. Did surviving in civilization prepare you for for surviving in the wild?

TL: Being homeless at a young age built a mental strength within me that made me able to take on anything. The stuff I went through as a child and early teenage years, it made me a mental survivalist, and that gave me the ability to get through my first and second challenge on Naked and Afraid.

MC: On a *way* lighter note, everyone seems fascinated with your eye makeup. Your liner and lashes are perfect. Were you allowed to bring eyeliner on the trip?

TL: I'm gonna have makeup the entire time I'm out there because I have permanent eyeliner and eyelash extensions. I have pretty good-looking makeup the whole time. I don't know why people don't understand permanent makeup exists! Being a single mother it makes life so much easier to just roll out of bed and go.