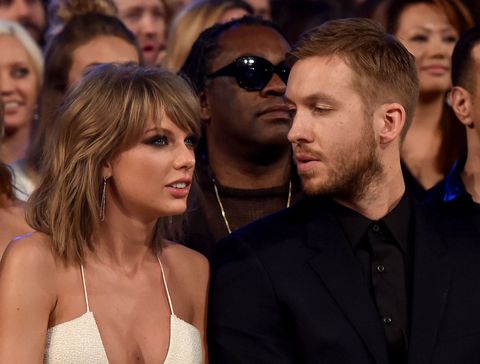 Looks like Calvin Harris might have just pulled a Taylor Swift on Taylor Swift. The Scottish DJ, who dated Taylor for 15 months before their shade-fest of a breakup, just released "My Way" with his very own vocals—and the internet is currently 💀 💀 💀 over the lyrics. Ahem, on that note:

Why wait to say, at least I did it my way

But in my heart I understand

I made my move and it was all about you

Now I feel so far removed.

Dang, Calvin Harris, tell us what you really think. "[The] song's kind of about breaking out of a situation that you thought was a good thing. Then, you're way more comfortable out of it," he tells iHeartRadio. "And it could be anything. It could be a job, or it could be a relationship. I had kind of the idea for the concept for a few years, but I didn't know how to work out how it sounded."

Kay, pretty vague, but the internet has some theories about what (er, who) this song is about:

Calvin Harris's swipe track at Taylor Swift #MyWay is quite a painful listen.

Patiently waiting for Taylor to drop her next album like...