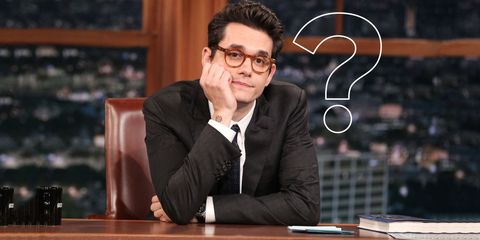 John Mayer is many things. He's a man. He's a myth. He's a legend. He's also the subject of a Taylor Swift song. But who is John Mayer, really? We did some soul searching/investigative journalism to answer this important question, and came up with several scientific* discoveries.

*These discoveries are not at all scientific.

Because in case you missed it, his website is selling these bad boys. They have morse code on them, so if you don't read morse code already please educate yourself for the sake of John, what are you even doing?!?!?!

A lot of photos like this are happening, and frankly, the thought of John Mayer using an old-timey typewriter whilst wearing a tiny-sleeved jacket is a joy.

Equally Important: He's Someone Who Wants Our Laundry to Smell Clean

If you take pride in what you wear but you're not concerned with fabric care, you're missing half the story (and probably trashing some great stuff.) I teamed up with @thelaundress to create a limited edition detergent and fabric fresh spray called OUT WEST. Pre-order by clicking the link in bio and help support a great cause while keeping your clothes corrrrect, not just clean. #thelaundress #handwashing #hypebeast #gq #complex #hypebae #highsnobiety #fashion

Guys, all our bodies can be wonderlands now!

Lest you forget, John filmed an entire Snapchat tutorial of his facial routine. He spent $1,422, and our brave beauty editor Lauren Valenti was so inspired that she recreated the entire thing.

Hold Up, He Designs Eyewear

If you like the sunglasses I've worn over the past few years, chances are they're @maxpittion, a vintage eyewear company I discovered and quietly relaunched with @tommyogara. They're now available at one of my favorite stores @havenshop, so I figure the time is right to post about it. 😎

Turns out John "quietly relaunched" an entire company while the rest of us were at home deciding whether or not to eat that third slice of cake.

And He's a Professional Cave Photographer...Or Something

Fact: over 90 percent of photos of caves posted online were taken by someone else. This photo is no exception. If you are the copyright owner and you do not want your work featured, please contact me and I will take it down. If you are interested in my photos of caves, or are a teacher of cave photography, please also contact me, but keep in mind there may be a delay in my response because I *could* be embroiled in a copyright lawsuit involving a certain cave photograph or two that I didn't have the right to use. Screw 'em though. Look at this image. Nearly perfect photo of a cave.

All we know is that John has a lot of feelings on caves. All the feelings. No, like, go ahead and put away your own cave-related feelings because John has them all.

And Duh, He's a Gamer

Nothing to see here, totally normal amount of money to spend, moving on.

The Ghost of Shakespeare is so proud.

And an Innovator in FaceTune:

So good to see my friend Ricky again. It's been a while.

What is this magic?

And Finally, He's a Man Who Posed as a Horse on Tinder

Okay, so that was a lot of discoveries and we still have zero answers. But after much deliberation, our working hypothesis is that John Mayer can't be defined, and doesn't fit into a box. Let's all agree to never put him in one.