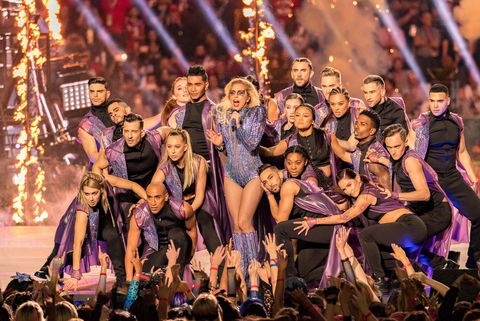 Lady Gaga is not one to stay silent about politics. Her halftime performance at Super Bowl 51 was amazing, yes, but also made a political statement so subtle you might have missed it all together. As Gaga said before singing her ballad Million Reasons, "we're here to make you feel good." She did exactly that with an uplifting and inspiring powerhouse performance.

Gaga's opening set the tone for inclusiveness and unity. She began with "God Bless America" and "This Land Is Your Land," two songs about American patriotism and pride. "This Land Is Your Land," in particular, has very pro-immigration lyrics and has become an anthem for those protesting Trump's immigration ban, Vanity Fair states. Immediately after, Gaga read a poignant line from the Pledge of Allegiance, "one nation under God, indivisible, with liberty and justice for all," before jumping onto the field.

Later in the performance, she sang "Born This Way," one her biggest hits and an unofficial anthem for the LGBTQ community. The song celebrates diversity and individuality, a message that has taken on a whole new meaning today. And, as many Twitter users noticed, the lyrics to the song were likely the first time the word "transgender" was sung at the Super Bowl.

By not making an overtly political statement, Gaga said everything she wanted to say. She was uplifting, encouraged solidarity, and was pro-America at a time when the country is extremely divided.

Prior to the performance, Gaga remained coy about details but made it clear she wanted to help unify the country."The only statements that I'll be making during the halftime show are the ones that I've been consistently making throughout my career," Gaga said in a press conference according to the New York Times. "I believe in a passion for inclusion. I believe in the spirit of equality, and that the spirit of this country is one of love and compassion and kindness. My performance will uphold those philosophies."

Initial reports that the NFL told Gaga politics were off limits during her show were quickly debunked, with the NFL telling TMZ Sports,"this is unsourced nonsense from people trying to stir up controversy where there is none."

Watch the entire halftime show below:

Maggie Maloney Associate Digital Editor Maggie Maloney is the associate editor at Town & Country and ELLE Decor, where she covers style, beauty, jewelry, and the many members of the royal family.
This content is created and maintained by a third party, and imported onto this page to help users provide their email addresses. You may be able to find more information about this and similar content at piano.io
Advertisement - Continue Reading Below
More From Celebrity
Simone Biles Cheers on MyKayla Skinner
See the Royals Socialize at a 1991 Cocktail Party
Advertisement - Continue Reading Below
Eugenie's Pics from Inside Harry and Meghan's Home
Queen Trolled Tourists Who Didn't Recognize Her
Blake and Ryan Recreated Their First Date on IG
Charles Expertly Ignored Boris Johnson's Snafu
How Kitty Spencer's Wedding Dress Honored Diana
Dolly Parton On the #FreeBritney Movement
Will & Kate Are Nervous About George's Future
George Won't Be Forced to Go to Boarding School