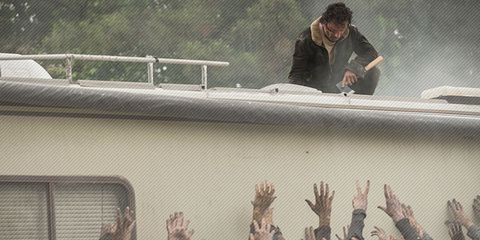 The Walking Dead returned Sunday night for the second half of Season 7, and there's plenty to talk about. While critical consensus is that the show has lost its way in recent episodes (okay, make that in recent seasons), a lot of fans have hope for Season 7B, which promises to see the gang *finally* take on Negan. With that in mind, here's what you need to know about the second half of The Walking Dead Season 7.

The Walking Dead's midseason premiere was Sunday, February 12, kicking off the final eight episodes of a16-episode season. So far, air dates have only been announced through episode 13, but if AMC continues to run one new episode a week, we can expect the finale to air April 2, 2017.

The Walking Dead may have lost fan favorite Glenn this season, but its cast has been steadily growing overall. In July, Jeffrey Dean Morgan was promoted to series regular, meaning we should expect to see his character Negan through at least the end of 7B. Morgan wasn't the only actor to join the cast full-time in Season 7—Austin Amelio (Dwight), Tom Payne (Jesus), and Xander Berkeley (Gregory) were also promoted to series regulars.

Rounding out the very long list of series regulars (via TV Line) are:

Fans and critics alike have complained about the slow progress of The Walking Dead's plot lately—and it sounds like the showrunners have heard our pleas.

"Obviously, I've heard that people are not happy and that makes me unhappy because of the amount of work we all put into the show," Andrew Lincoln, who stars as Rick Grimes on the series, told The Wrap. "There is a sense of a bigger story that's being told and I have absolute faith in Scott, the writing team, and the producers of the show. But I will say that I think the back eight are the exact opposite of the front eight."

The show will continue following the storyline established in the comics, which means we should all be ready for war.

"Anybody who knows the comic books knows we're about to go into a couple of years of war," Lennie James, who plays Morgan, told Digital Spy. "I don't know how long that's gonna pan out in the series, but it goes on a while in the comics!"

'Breaking Bad' and 'The Walking Dead' take place in the same universe.

This one has been floating around for a while, but we're always on the lookout for new clues that might hint at it being real. The theory was sparked by Merle Dixon's blue crystal meth in Season 1—which looks quite similar to the meth shown in Breaking Bad.

A more elaborate theory even suggests that Breaking Bad is a direct prequel to The Walking Dead. This video breaks it down:

Carl has a devastating reason for not cutting his hair.

Many fans have expressed frustration over Carl's ever-growing locks, but one fan theory offers a heart-wrenching explanation for his aversion to haircuts. Remember back in Season 1 when Lori was giving Carl a haircut and he was SO not into it? And Shane warned him that one day he'll wish for his mom's haircuts, but Carl was super flippant about it?

Well, since Lori died in the prison after her C-section in Season 3, Carl has probably come to appreciate Shane's warning and very much miss his mom's haircuts. That's why some fans think he's been growing out his hair for sentimental reasons.