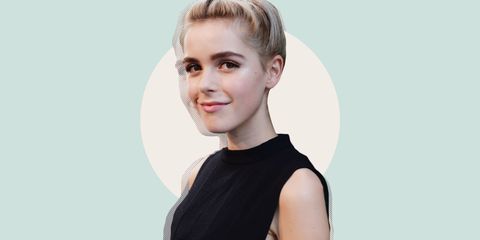 In the event that you didn't spend Sunday night watching the premiere of Feud: Bette and Joan, please cross it off your to-do list immediately. The new Ryan Murphy show chronicles the notorious rivalry between Hollywood legends Bette Davis and Joan Crawford, and is packed with Emmy-worthy performances from Jessica Lange, Catherine Zeta-Jones, Susan Sarandon, and Kiernan Shipka—who plays Bette's daughter.

MarieClaire.com spoke to Shipka about working on yet another badass feminist set, whether she'd be up for a Mad Men reunion, and if we can expect to see her on the upcoming Feud: Charles and Diana.

"I literally know as much as you! I have no idea. In my wildest dreams, sign me up. If they want me I'm there."

"I'm up for it. I love those people. I saw them the other day—it was so good to see everyone, we took a bunch of selfies, and I want to do it again. Any chance, I would do anything with them."

"In a lot of ways, things have changed and improved, but Feud shows that the media and Hollywood have had a hobby of pitting women against each other. And it's really one thing that hasn't changed. With social media, it's only exacerbated–but that's my opinion."

"Mad Men was such an integral part of my childhood, it felt like so much more than being on a show. It was everything to me. It was this elevated thing that changed my life, and was with me for a huge chunk. I've had to not compare anything else because they're such difference experiences. But there are similarities—working with top notch people, feeling so comfortable in their hands, and feeling like I'm a small part in this big big puzzle."

That Said, She's Not Looking to Replicate the 'Mad Men' Experience

"I was six when I started and 15 when it wrapped. That's just something that can never be repeated in such an impactful way. Man Men made me appreciate things and it was this big acting school. Every project I've been on since has also been a joy, but in a different way."

Yes, Politics Were Present While Filming 'Feud' (After All, Sarandon Was on Set)

"Politics are always present—but they were especially when we were filming. There's so much healthy discussion about it, which is very important—to talk, get everyone's perspective, and really listen."

Her Understanding of Feminism Was Shaped on TV Sets

"I grew up in such an feminist environment. I got to be this little girl that was looking at these female characters being portrayed as real human people. I got to be directed by amazing female directors and writes. It shaped my views and made me feel so confident in myself because I was seeing other women represented in things I wanted to do as well. I'm still learning, but going on to a show like Feud—Ryan is not talking the talk, he's walking the walk. I stumbled into both of these things but I couldn't feel more lucky—as a big feminist myself—to be part of these shows."

Mehera Bonner Contributor Mehera Bonner is a news writer who focuses on celebrities and royals.
This content is created and maintained by a third party, and imported onto this page to help users provide their email addresses. You may be able to find more information about this and similar content at piano.io
Advertisement - Continue Reading Below
More From Celebrity
Lilibet May Be Christened in California After All
The Sweet Family Photos in Prince William's Office
Advertisement - Continue Reading Below
Royal Family Members Can’t Eat Pasta or Potatoes
Prince George Is an Environmentalist, Too
Salma Hayek Looked Super Hot in Leopard Print
Britney Spears Just Trolled Justin Timberlake
Billie Eilish Says Kate and Will Were "So Normal"
Prince William Slammed Billionaires' "Space Race"
Lady Gaga Draped Herself in $100 Bills
Kate Middleton Wore Green to Celebrate Nature