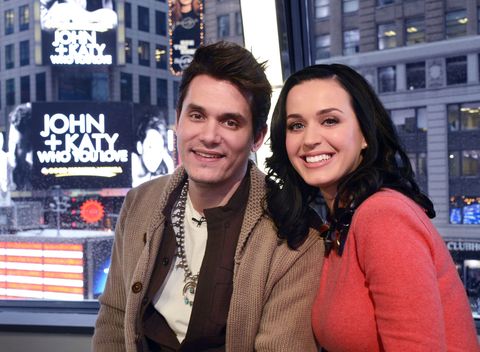 John Mayer recently released his new single "Still Feel Like Your Man"—and if you've heard the track and thought, "Hmm...is this about Katy Perry?" Mayer is here to confirm that yeah, of course it's about Katy Perry.

"Who else would I be thinking about?" the singer/songwriter told The New York Times. "And by the way, it's a testament to the fact that I have not dated a lot of people in the last five, six years. That was my only relationship. So it's like, give me this, people."

The "give me this" comment is a response to Mayer's rather infamous dating history (he's been linked to a slew of famous women, from Jennifer Aniston to Taylor Swift).

"I'm a young guy. I like girls. I want girls to like me," he continued. "I want to make music and be thought of as attractive."

In addition to opening up about the inspiration behind "Still Feel Like Your Man," Mayer compared himself to George Clooney, because why not? Mayer feels ready to reclaim his days at the top of the charts after keeping it low-key for quite some time—which he thinks mirrors Clooney's film career, apparently.

"There's a guy who can make art house films and then just decide that he's going to be in a blockbuster," he explained. "I remember thinking to myself, 'Okay, I'm going to basically come out of retirement from blockbusters. It's a choice to write pop songs, just like it's a choice to write blues songs or folk songs. Let's write the big ones that we are capable of writing.'"

Mayer's new album, The Search for Everything, comes out April 14.

Kayleigh Roberts Kayleigh Roberts is the weekend editor at Cosmo, focused on celebrity news and royals.
This content is created and maintained by a third party, and imported onto this page to help users provide their email addresses. You may be able to find more information about this and similar content at piano.io
Advertisement - Continue Reading Below
More From Celebrity
Khloé and Tristan Have "No Label" Right Now
Kate and Will Share Intimate Moments in New Photos
Advertisement - Continue Reading Below
Scott Disick Avoids Travis Barker, Apparently
Adele's Latest Date Look Was a Leather Suit
Alicia Silverstone Got Banned From a Dating App
The Queen Just "Reluctantly" Canceled a Trip
Adele's Album Will Feature a Sensitive Voicemail
Selena Gomez Just Debuted a Sleek Bob
Zendaya Looked Incredible at the 'Dune' Premiere
Kate Middleton Is Helping Tackle Addiction