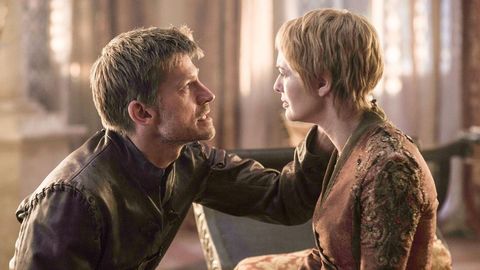 All those fan theories about Jaime Lannister adding "Queenslayer" to his list of nicknames might just be right after all. In a new interview with Mashable, Nikolaj Coster-Waldau, the actor who plays Jaime, weighed in on rampant fan speculation that his character would be the one to take Cersei out.

While he stopped short of actually confirming or denying the rumors, he was more than willing to talk it out.

"I mean I don't think he—I'm just saying it's a valid theory," he said. "I can see it makes sense, it has a beautiful—it's a nice circle [that] they are born together in the womb and then he kills her at the end…It makes sense."

Uh huh...nice circle indeed, Nikolaj. And the fact that Jaime killed the Mad King for just threatening to use Wildfire to destroy King's Landing and (spoiler) Cersei actually did exactly that? Yeah, he also sees the symmetry there.

"You could say that could—that the motivation for doing that would be the same for killing Cersei, but I haven't seen anything yet before Season 7 that would make me believe that he was capable of doing that," he said.

Only time (at minimum 76 days) will tell if Jaime is capable of doing whatever it takes to stop his mad, mad sister/lover. Game of Thrones Season 7 premieres July 16 on HBO.