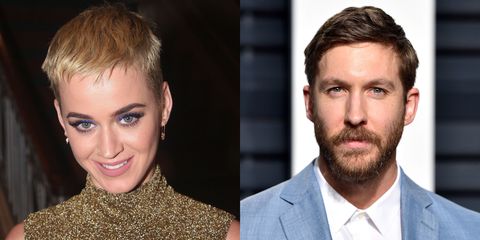 In what surely qualifies as a 🚨 🚨 🚨 pop culture moment, Katy Perry is collaborating with Calvin Harris on his new album Funk Wav Bounces Vol. 1. Which wouldn't be a *huge* deal if they both weren't engaged in never-ending bad blood with Taylor Swift.

Swift's feud with Perry goes way back to the dawn of time, while her relationship with Harris soured after they broke up. Meanwhile, Perry and Harris have publicly commiserated about their shared issues with Swift via Twitter. In a since deleted tweet, Harris wrote "I know you're off tour and you need someone new to try and bury like Katy ETC but I'm not that guy, sorry. I won't allow it," to which Katy responded:

Naturally/inevitably, Swifies are all kinds of horrified by the collaboration, and their tweets are highly amusing:

THE POWER OF TAYLOR SWIFT Calvin and Katy collab is happening. I hope your two petty asses credit Taylor Swift for it! #sendingyoulove 😘 https://t.co/fRVl4pqBmN

mood: taylor releasing her single in august and everyone forgetting that katy and calvin did a song a together

Excited to hear the song itself, but in the meantime this has been Volume XVIII in The Greatest Pop Culture Feud of Our Time.