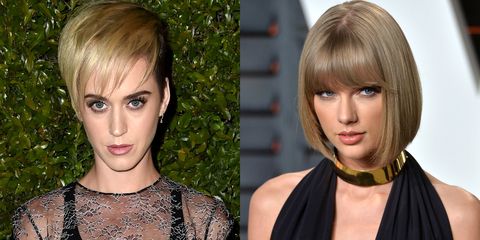 When it comes to politics, Katy Perry is one of the most outspoken and vocal celebrities that pop culture has to offer. She campaigned hard for Hillary Clinton. Her recent music is full of social allegory. And let's not forget about the time she showed up wearing this:

In fact, when it comes to social justice and politics, you might say Perry is the exact opposite of her long-time rival Taylor Swift, who's known for her apolitical nature in general, and didn't throw her support behind either candidate during the recent presidential election.

Perry and Taylor's feud goes way back, and the "Chained to the Rhythm" singer seems to have low-key called her out during a Vogue interview, saying "I think you have to stand for something, and if you're not standing for anything you're really just serving yourself, period, end of story."

The interviewer noted that this remark was made "pointedly," and that Perry was "perhaps aiming at some of her deliberately apolitical confreres." Which, we can all agree, is code for "Taylor Swift Shade Alert."

Here's to hoping Ryan Murphy is taking note of this moment for an upcoming season of Feud.