After years spent keeping understandably quiet about the sudden death of their mother Princess Diana, Prince Harry and Prince William are finally opening up about processing their grief.

In a new BBC documentary titledDiana, William explains his reasoning for baring all: "Part of the reason why Harry and I want to do this is because we feel we owe it to her," he explained. "I think an element of it is feeling like we let her down when we were younger. We couldn't protect her."

"I think it's never going to be easy for the two of us to talk about our mother," Harry adds. "But 20 years on seems like a good time to remind people of the difference that she made not just to the royal family but also to the world."

Harry also spoke about the days following Diana's death—saying the outpouring of love has stayed with him. "It was beautiful at the same time, and it was amazing. Now, looking back at it, it was amazing that our mother had such a huge effect on so many people. When you're that young and something like that happens to you, I think it's lodged in here, there, wherever—in your heart, in your head and it stays there for a very, very long time."

William and Harry were teenagers when Diana died at the age of 36 in Paris. The 20th anniversary of her death is on August 31. 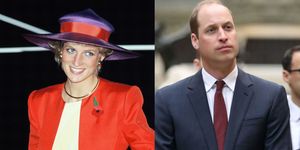 Mehera Bonner Contributor Mehera Bonner is a news writer who focuses on celebrities and royals—follow her on Instagram.
This content is created and maintained by a third party, and imported onto this page to help users provide their email addresses. You may be able to find more information about this and similar content at piano.io
Advertisement - Continue Reading Below
More From Celebrity
J.Lo Claps Back After Botox Comments
Katie Just Posed in a Shirt Her Boyfriend Designed
Advertisement - Continue Reading Below
Meghan Wasn't Appreciated for Royal Contributions
Harry & Meghan Have Had a Painful Year Since Exit
The Queen's Hot Grandnephew Is a Thirst Trap
Watch Diana Play Impromptu Piano in Rare Clip
Peek Inside the Cambridges' Country Home
Harry Is Heartbroken About His Family Situation
William and Harry Could Fight Over Diana's Legacy
William Reveals Which of His Kids Is the Cheekiest