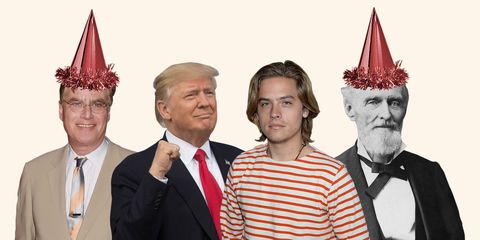 This week in petty...a catfight at Cateau Marmont (SCREAMING), some shady Wikipedia editing, and 30 minutes in hell. Sorry, 1 Oak. Welcome to the Petty Party, where we acknowledge and mostly laugh at behavior like that of some dude named Brett unfollowing us on Instagram after we posted a picture of Olivia Wilde protesting at Trump Tower.

In the most complicated case this week, the Chateau Marmont sent a cease-and-desist letter to the Cateau Marmont asking the feline-only grooming establishment to change its name or they'd sue, according to the Hollywood Reporter. Jennifer Shields, who owns Cateau Marmont, told ABC7 last week, "People don't even know what Chateau Marmont is." The whole back-and-forth is wild, and there are puns and animal-themed digs galore, so have a read.

When It Was Worth Getting Banned from Wikipedia

To get the vibe just right for a scene in a film about celebrity high-stakes poker games, Aaron Sorkin, the dude who makes everybody talk like that in the Newsroom, ventured into da klerb—1 Oak, naturally—by himself, where he sat for 30 minutes observing. "Oh no, it seemed like a perfectly fine place," he told Entertainment Weekly. "I'm not really…I learned everything I needed to know in that 30 minutes. If I had of been out with friends, I would have stayed longer. It's a terrific place. Fine time at 1 Oak. I don't want to flag 1 Oak. I had a fine time at 1 Oak, but I was really…I was there by myself and I just needed to see what went on there."

Yes. Then, after fans were significantly shook, model Dayna Frazer's ex-boyfriend Dylan Sprouse told his side of the story, also on social media.

"I will say this and only this: By adhering to an assumption based on limited information, you neglect the complicated nature of this issue," the Sprouse twin not on Riverdale wrote in a series of tweets. "The truth always has two sides, and those sides have motivations, and those motivations, despite how cloudy they currently seem, are private. This is complicated and it will remain complicated, but those who know me and who have known me, know well enough what kind of person I am. And that is all." Then they deleted all trace of each other on Instagram.

Despicable pharma-bro Martin Shkreli, like all of us, has the right to be tried by a jury of his peers. Except everybody was vehemently against it (and him), as shown by the beautiful transcript of the jury selection proceedings Harper's Magazine published recently. Top quotes: "He kind of looks like a dick." And "he disrespected the Wu-Tang Clan." <333

Chelsea Peng I'm Chelsea Peng, the assistant editor at MarieClaire.com.
This content is created and maintained by a third party, and imported onto this page to help users provide their email addresses. You may be able to find more information about this and similar content at piano.io
Advertisement - Continue Reading Below
More From Celebrity
Chrissy Teigen's Therapist Inspired Her New Hobby
J.Lo Claps Back After Botox Comments
Advertisement - Continue Reading Below
Katie Just Posed in a Shirt Her Boyfriend Designed
Meghan Wasn't Appreciated for Royal Contributions
Harry & Meghan Have Had a Painful Year Since Exit
The Queen's Hot Grandnephew Is a Thirst Trap
Watch Diana Play Impromptu Piano in Rare Clip
Peek Inside the Cambridges' Country Home
Harry Is Heartbroken About His Family Situation
William and Harry Could Fight Over Diana's Legacy