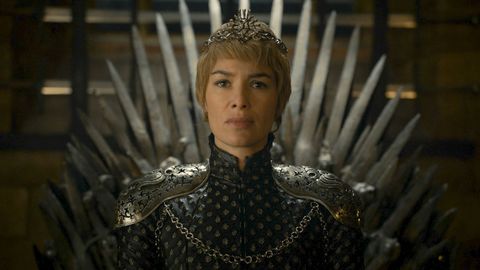 [Spoilers from Sunday's episode lie below.]

We can probably all agree that Sunday's penultimate episode of Game of Thrones was completely "I'm wrecked" inducing. Between one of the dragon's dying, and all the plot holes, it was just...a lot. And now our world has been even further rocked thanks to a fan theory that claims Cersei is secretly Gendry's mom. Which, at first is completely:

But upon further reflection, is actually pretty convincing.

The theory points out that in Game of Thrones' first season, Cersei tells Cat Stark about her "lost baby with Robert." Per Reddit, "She tells her he was black-haired. Afterwards, in the fourth episode, Ned find out that Jon Arryn talked to Gendry before he died about his mother. Gendry says his mother was blond."

It's therefore possible that Cersei faked her son's death and sent him away so that the rightful heir to the Iron throne wouldn't be Robert's son, but would be her and Jaime's first child—AKA Joffrey.

If this is the case, Gendry technically has a claim to the throne, and could be put in a slightly awkward position considering he's currently on Team Jon Snow. Good times. 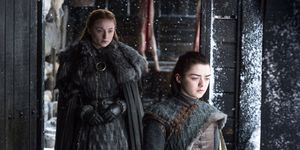 Mehera Bonner Contributor Mehera Bonner is a news writer who focuses on celebrities and royals—follow her on Instagram.
This content is created and maintained by a third party, and imported onto this page to help users provide their email addresses. You may be able to find more information about this and similar content at piano.io
Advertisement - Continue Reading Below
More From Celebrity
Chelsea Handler Skied Naked for Her 46th Birthday
How Kristen Stewart Is Prepping to Play Diana
Advertisement - Continue Reading Below
How to Make the Queen's Favorite Cocktail
The Queen Told Harry to Uphold His Family Values
Twitter Is Thirsting over Prince Harry
Gabrielle Union Just Wore a Daring 2000s Trend
28 ‘Real Housewives’ Who Left The Franchise
Queen Elizabeth Fun Facts
Celebrities Who Don't Use Their Real Names
63 of the Shortest-Lived Celeb Marriages