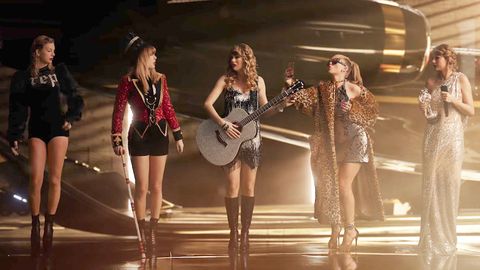 Taylor Swift's "Look What You Made Me Do" video is so full of easter eggs. It's basically a four-minute-and-sixteen-second egg hunt.

If you've somehow avoided seeing it this long, take a look for yourself:

Much of the discussion about the video has focused on the bit at the end, in which the different incarnations of Taylor snipe at each other using the things critics have said about the pop star for years (she's fake, the pretend surprise face is annoying, etc.).

Some fans on Tumblr think we've all been looking at the wrong thing during that part of the video though. Instead, they say, we should be looking at the version of Taylor who is still up on the plane—the one who spray painted the word "reputation" across it. That, they say, is the real Taylor.

According to People, Taylor has even been liking some of these fan theory posts, which seems like a very Swift way to subtly confirm them.