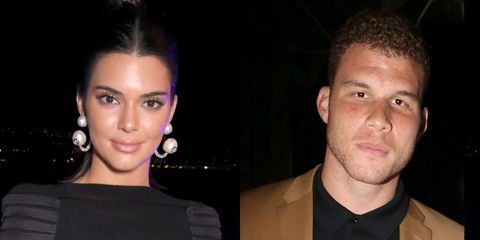 Earlier in the week it was reported that Kendall Jenner is dating A$AP Rocky AND Blake Griffin. But this weekend, Jenner has only been spotted with one of the two men in her life, and that's Griffin.

The LA Clippers basketball player was spotted on Saturday night on dinner date with Jenner at Nobu. The pair both wore outfits featuring tropical prints, almost as if they'd co-ordinated for the outing.

According to People, Jenner is "keeping her options open," but it certainly looks as though she's getting a lot closer to Griffin.

People also quoted a source as saying, "It's hard for Kendall to settle down still because her schedule is so crazy and she's always traveling." But, for now at least, Jenner looks super happy to be dating Griffin, and their matching tropical prints are beyond cute.

Amy Mackelden Weekend Editor Amy Mackelden is the Weekend Editor at HarpersBAZAAR.com, where she writes about entertainment, celebrity news, beauty, and fashion.
This content is created and maintained by a third party, and imported onto this page to help users provide their email addresses. You may be able to find more information about this and similar content at piano.io
Advertisement - Continue Reading Below
More From Celebrity
Rihanna Takes Out the Trash on Trump's Last Day
Chrissy Teigen Shared a Moving Post About Sobriety
Advertisement - Continue Reading Below
Meghan's Royal Aides to Testify in Her Court Case
Greta Thunberg Hilariously Trolled Trump—Again
Watch Demi Perform During Biden's Inauguration
Joe Biden Follows Chrissy Teigen on Twitter
J.Lo Wore Head-to-Toe Chanel for the Inauguration
The Queen Sent a Private Message to Joe Biden
Lady Gaga's PDA with Boyfriend Michael Polansky
Twitter Reacts to Lady Gaga at the Inauguration