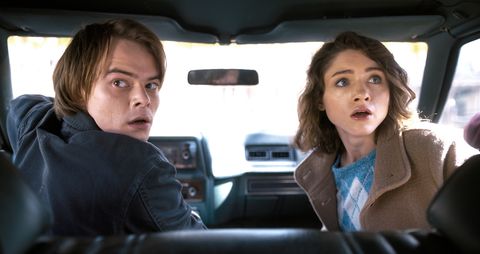 As we countdown to the premiere of Stranger Things Season Two (October 27 cannot get here fast enough), we're also scouring the internet for spoilers because—well, it's 2017 and that's the world we live in. On that note, here's every spoiler about Season Two that the cast and crew have accidentally (or not-so-accidentally) leaked so far.

According to literally. Everyone.

But there's a "New Barb" in Season Two.

During an interview with ScreenRant, Stranger Things director Shawn Levy revealed that a new character will fill the Barb-shaped hole in the show.

"It's Sean Astin," he said. "Yeah. Sean Astin as Bob is going to be, I'm saying it, but he's kind of going to be the Barb of Season Two. His part is substantially bigger. He's in a lot of episodes. He is magnificent."

Of course, saying that Astin's character is the "New Barb" could also be a very different kind of spoiler—a hint that Bob won't survive the season. He's in "a lot of episodes," after all, not "all episodes."

Something "very disturbing" will happen to Will.

Finn Wolfhard, who plays Mike, revealed that, "Something happens to Will in the first couple of episodes that's very, very disturbing." Color us intrigued.

And also, Will might be a villain this season.

During an interview with Us Weekly, Ross Duffer teased a very sinister turn for the character in Season Two.

"Will Byers, who was sort of trapped in the Upside Down for most of Season One, now has a much more sinful role, which we're really excited about. Noah is just an incredible actor and he really didn't get a lot to do Season One."

A new character named Billy will bring real-world terror to the show.

Stranger Things is known for its unique take on supernatural horror, but the show is influenced heavily by the films of the 1980s and the work of Stephen King, which is going to show through in a new way during Season Two. Matt Duffer told Entertainment Weekly, "Stephen King always has really great human villains. The evil in the real world is often as bad or worse than the supernatural evil, so we wanted to introduce a character like that."

And Season Two will have a new monster, too.

If the Demogorgon gave you nightmares, then we have good news and bad news.

"Last season, a lot of the horror and a lot of what was happening with Will was off screen in the Upside Down," Ross Duffer told TVLine. "That's not the case [in Season Two]. The horror is more up-close and personal."

Dustin will get a polliwog-like pet.

Gaten Matarazzo confirmed his character's (literally) out-of-this-world pet during an interview with Entertainment Weekly. "It's a little creature I get to bond with," he said. "It's obviously not from this planet or this dimension."

"Hopper's daughter will be the primary focus of Season Two, but not in the way that you think it will be," David Harbour told TV Guide. "Hopper's understanding of that relationship, and Hopper's understanding of being a father and of being a man, grows deeper and deeper in Season Two, and we get a lot of time to explore what that is—but it won't be in the literal way that you think it is. I don't want to tell you any more than that because it's good stuff."

The season will end on another big cliffhanger.

At the Emmys, Matt Duffer rated the Season Two ending a seven on a cliffhanger scale of one to ten (with ten being the most cliffhanger-y).

For more on Stranger Things' upcoming season, head this away: