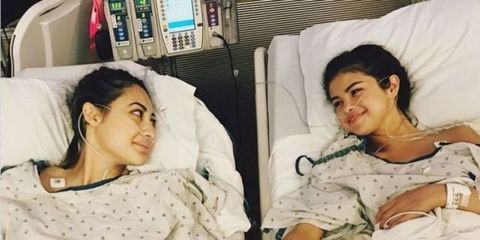 Not even a kidney transplant can slow down Francia Raisa's workout routine. A week after Selena Gomez shared that her best friend donated her kidney over the summer due to Gomez's battle with Lupus, Raisa posted a badass Instagram video of herself at the gym.

"Happy to be back," she captioned the video of herself lifting weights on Thursday. In the post, Raisa is seen wearing only a sports bra and workout pants, which reveals her midriff and her post-op scars.

Happy to be back

Raisa may be hitting the gym to prepare for her role in the Black-ish spinoff Grown-ish, in which she will play the character of Ana.

Life has seemingly also gone back to normal for Gomez, who was recently spotted in New York City filming for an upcoming movie. But although they appear almost the same on the outside, on the inside, the best friends are bonded forever.

"There aren't words to describe how I can possibly thank my beautiful friend Francia Raisa," Gomez wrote in an Instagram post on September 14. "She gave me the ultimate gift and sacrifice by donating her kidney to me. I am incredibly blessed. I love you so much sis."

I’m very aware some of my fans had noticed I was laying low for part of the summer and questioning why I wasn’t promoting my new music, which I was extremely proud of. So I found out I needed to get a kidney transplant due to my Lupus and was recovering. It was what I needed to do for my overall health. I honestly look forward to sharing with you, soon my journey through these past several months as I have always wanted to do with you. Until then I want to publicly thank my family and incredible team of doctors for everything they have done for me prior to and post-surgery. And finally, there aren’t words to describe how I can possibly thank my beautiful friend Francia Raisa. She gave me the ultimate gift and sacrifice by donating her kidney to me. I am incredibly blessed. I love you so much sis. Lupus continues to be very misunderstood but progress is being made. For more information regarding Lupus please go to the Lupus Research Alliance website: www.lupusresearch.org/ -by grace through faith