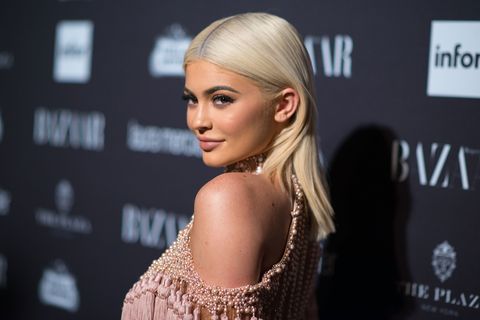 When news broke that Kylie Jenner was expecting her first child with boyfriend Travis Scott, the internet collectively agreed to put life on hold and look for clues about the rumored pregnancy. Here's every clue Kylie has dropped in recent months that she might be expecting.

When Kylie released her Birthday Collection this summer, she re-released some old favorite shades—including Baby Girl. We see what you did there, Kylie.

She talked to People about her plans to have a family in the future. "I do want kids. Who doesn't want kids? My dogs feel like my little kids."

Kylie gave WWD a shoutout on Instagram for a cover emblazoned with the headline, "Billion-Dollar Baby?" The headline refers to Kylie's cosmetic empire, but in light of recent news, the share feels more meaningful.

thank you @wwd for the digital cover ♥️

In late August, Kylie shared a selfie that showed her pointing to her belly. Trying to tell us something?

Kylie shared her latest Lip Kit shades in mid-September, including one named after her oldest niece, Penelope. Did she have baby girls on the brain when she named that shade?

Kylie shared this fan art by @vladyart, depicting Kylie and her younger self. Since Kylie is rumored to be expecting a girl, however, it could remind her of a different kind of mini-me.

Kayleigh Roberts Kayleigh Roberts is the weekend editor at Marie Claire, covering celebrity and entertainment news, from actual royals like Kate Middleton and Meghan Markle to Hollywood royalty, like Katie Holmes and Chrissy Teigen.
Advertisement - Continue Reading Below
More From Celebrity
Inside Chrissy Teigen and John Legend’s Home
A Look at Royal Family Portraits Through the Years
Advertisement - Continue Reading Below
Are The Weeknd's 'After Hours' Lyrics About Bella?
Kendall and Harry Had a Moment At the Brit Awards
Dwyane Wade on Getting Zaya's Pronouns Right
Harry Styles' Diana-Inspired Brit Awards Outfits
Jenna Dewan and Steve Kazee Are Engaged
Kim Seemingly Tried to Kiss Kanye on a Kiss Cam
Ashley Graham Continues to Spread Body Positivity
'Bachelor' Victoria F. & Peter's Ex Had a Fight