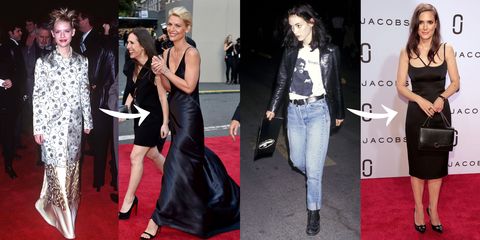 With great fame comes a seriously upgraded look. It's no secret that celeb style gets better every year, but, unlike the rest of us, they don't have the luxury of hiding away the evidence of the '90s trends we pray never return. Here, a look at how the times have changed.

Would never expect anything less than a body-con stunner from J.Lo.

From the Fire and Ice Ball to *literal* fire and ice. 🔥

Color and a bold statement has clearly always been Miley's thing.

Keeping in line with the silk fit only for Juliet.

Can you guess Kate's favorite silhouette?

For a red carpet first-timer, a pant suit was quite the sophisticated choice.

A shorter hem and better fit, yet still all the class.

Okay, so mayyyybe supermodels are exempt from the whole throwback photo thing.

Proof that he's always been this way.

Honestly having no issues with either look. Bring back the buzz, Demi!

These girls have nailed the almost-matching-but-not-quite look.

🎶SISTAH SISTAH! Never knew how good it fit ya! 🎶

Is that you Carrie Bradshaw?

The 90s girl in all of us would have *killed* for those sequined pants.

What seems like a style 180 is actually a continuation of delicate detail. Well done Naomi 👏👏.

When you're Paula Abdul you can really never go wrong.

Drew circa 1995 was on to something via choker and velvet slip dress.

If Captain Jack Sparrow and Sweeney Todd became one.

All hail the menswear 🙌.

Sleek and black stays true to the Winona we know.

Next
The Best-Dressed Celebrities at Paris Fashion Week 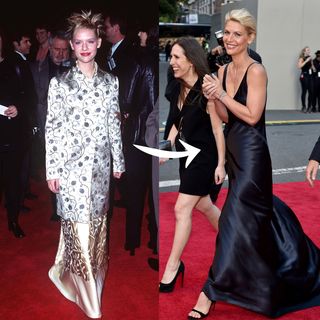