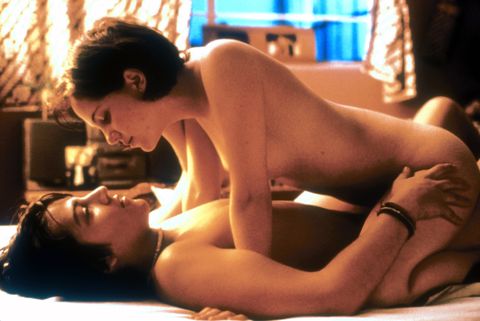 The R-rated film tells the story of a wife (Julianne Moore) who suspects her husband (Liam Neeson is cheating on her and decides to hire an escort (Amanda Seyfried) to see if it's really true. Come for the steaminess, but stay for the plot that has a lot of twists and turns.

A farmer in northern England who is used to the isolation his work brings him finds himself suddenly taken by a migrant worker from Romina. The story of an intense first love will bring some minor tears, but it's totally worth the watch.

The same writer of Atonement (another one on this list) brings us Adore, a film about two life long friends (Naomi Watts and Robin Wright) who each start a relationship with one another's sons. I know, I know the plot is honestly, creepy, but it's worth the watch.

Y Tu Mama Tambien is a really good movie (with really good sex scenes) about two friends who fall for the same woman on a road trip. Plus, it marks the moment when the world collectively fell in love with Diego Luna and Gael García Bernal.

This TV-MA movie is about what you'd expect it to be about based on the title. But if you need things spelled out, it's the story of two women who fall for each other and have a ton of hot sex.

Another one of Netflix's good ol' TV-MA options, this film is about a couple who are experiencing the idealized thrill of first love. It's sexy and has some sweet moments.

Blue Is the Warmest Color

The movie, which won the Palme d'Or at the Cannes Film Festival in 2013, follows Adèle's journey to sexual freedom when she meets Emma, a blue-haired painter—and it's rated NC-17.

This movie is both very sexy and very modern. The film, starring Nicholas Hoult and Laia Costa, follows a couple who meet on a hookup app. When both end up cheating, they decide to embrace their struggles with monogamy and embark on an open relationship. Sexiness (and group sex) ensues.

Argentine director Gaspar Noé's Love follows a man in an unhappy marriage who starts thinking about his former lover when he hears that she may have gone missing. Drama. Intrigue. Steamy steamy sex.

No, it's not about a literal, Lars and the Real Girl style sex doll relationship. Sex Doll is a French movie about about a high-end call girl who falls for a man she meets in a nightclub. Their relationship is put in jeopardy, however, by a secret he's keeping.

Two young women spend a sexy and intense 24 hours together when they decide to get to know each other by having sex every hour, on the hour.

31 Movies Where the Actors Have Actual Sex
Mehera Bonner Contributor Mehera Bonner is a news writer who focuses on celebrities and royals—follow her on Instagram.
Kayleigh Roberts Contributor Kayleigh Roberts is the weekend editor at Marie Claire, covering celebrity and entertainment news, from actual royals like Kate Middleton and Meghan Markle to Hollywood royalty, like Katie Holmes and Chrissy Teigen.
Advertisement - Continue Reading Below
More From Culture
How Murtagh Dies in the Outlander Books
What Happened to John Finlay From 'Tiger King'?
Advertisement - Continue Reading Below
'Outlander' Season 5 Is Back to the Show We Love
The Best Cooking Shows on Netflix
The Wildest Reviews of Joe Exotic's Zoo
What Happened to Doc Antle from 'Tiger King'?
Is Joe Exotic Still in Jail?
What Happened to Dillon Passage from 'Tiger King'?
Julia Louis-Dreyfus Has All the, Uh, Right Answers
Just 41 Wildly Funny 'Tiger King' Tweets