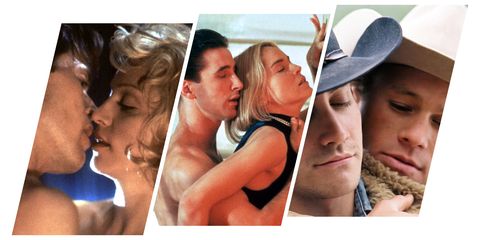 Under the Silver Lake

The sex in Brokeback Mountain was a huge deal for mainstream gay representation in film, and featured Jake Gyllenhaal and Heath Ledger's characters having passionate and frenzied sex in a tent.

I Love You Phillip Morris

Jim Carrey plays real-life con artist Steven Jay Russell in this sweet movie about a man who falls in love with a fellow prison inmate (a.k.a. Phillip Morris) and does everything in his power to be with him—including escaping from behind bars four times. The film doesn't shy away from sex scenes, and they're pretty graphic.

The Wolf of Wall Street

In The Wolf of Wall Street, Leonardo DiCaprio plays real life Wall Street stockbroker/scam artist Jordan Belfort. The film chronicles the height of Belfort's drug- and sex-filled debauchery, and includes a scene with DiCaprio's character being anally penetrated with a candle during a night with a prostitute.

31 Movies Where the Actors Have Actual Sex
Mehera Bonner Contributor Mehera Bonner is a news writer who focuses on celebrities and royals—follow her on Instagram.
Advertisement - Continue Reading Below
More From Culture
Shonda Rhimes' New Netflix Show Will Be Steamy
Jennifer Lawrence Will Star In a Netflix Film
Advertisement - Continue Reading Below
Who From Bachelor Nation Will Be on the 'Games'?
The Best Romantic Films of the Year (So Far)
An Investigation Into the Next 'Bachelorette'
Mindy Kaling & Priyanka Chopra Team Up
How the 'To All the Boys 2' Soundtrack Was Made
Does 'Bachelor's Madison Prewett Self-Eliminate?
How Much Does 'The Bachelor' Make?
Tales of a Hollywood Con Queen