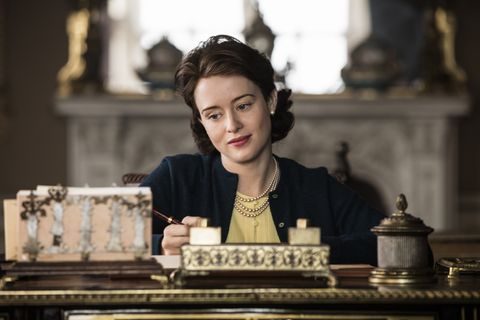 Hello. I spent 10 hours in a row of my life watching The Crown season 2. This is my story. (By which I mean these are my rambling thoughts—and I would say spoiler alert, but this show is based on history so we all know what happens.)

1. Good news: This season is starting with Elizabeth telling Philip he's a child, which yes, because literally all men are. Please see Exhibit A for proof.

2. You know what I don't need in my life? Philip mansplaining the Suez Canal to Elizabeth.

3. JK Philip, please tell me about the Suez Canal, I'm so confused.

4. *Looks up brief history of the Suez Canal on Wikipedia, understands nothing*

5. Do we think Philip and Elizabeth ever have anything other than missionary sex? Please don't answer that question.

7. OMG, Meghan Markle will probably hang out with that butler.

8. Remember when Meghan Markle was on Deal or No Deal?

If Meghan Markle can go from being a Deal or No Deal briefcase girl to an actual princess, I can find the willpower not to wear sweats all 7 days this week. pic.twitter.com/177AWnRpTt

9. Nothing but respect for MY Queen of England.

12. Lady Mountbatten just implied that her husband has a small penis, so I guess The Crown is making dick jokes now.

14. Hey Philip, remember when you were all cute on a hammock before you started cheating on Elizabeth? I DON'T.

16. Elizabeth is currently trolling the woman Philip's having an affair with by showing up at her ballet performance and glaring at her. I am LIVING.

17. That said, blame the man for cheating, not the woman he's cheating with.

18. Wow a bunch of burgeoning racist children are out here playing 'Cowboys and Indians' at a birthday party.

19. I love that the writers of this show are like, "Let's take the creative liberty to assume old British birthday parties were likely very racist."

20. There is a person on this show whose sole purpose seems to be taking on and off gloves.

21. All I will say about Prince Philip's trip across the world is that it's best described as deeply, deeply jaunty.

22. JK, I have so much more to say, like: Forcing indigenous communities to play cricket only to beat them and laugh at them is absolutely disgusting, and a reminder that the royal family's history isn't all sunshine, rainbows, and Kate Middletons.

23. Also, rating women around the world on a "scale of attractiveness" is so despicable. Philip and his Lunch Club friends can go ahead and f*ck right off.

24. Very much here for this journalist grilling Philip about his Nazi sister.

25. Elizabeth can't divorce Philip, but at least we get this delightful side plot of his private secretary's wife exposing her husband's cheating ways. TAKE THEM ALL DOWN.

26. Some things in life are unforgivable. One of those things is Philip's beard:

27. Philip in Tonga: "Hi guys, so happy to continue the glorious tradition of wealthy white people feeling deeply sorry for themselves about how wealthy and white they are."

28. Also Philip in Tonga: "Hello old chaps, thrilled to be doing my part to further the white savior narrative by helping a local fisherman on my fancy boat!"

29. Oh dear, someone in Antarctica let Philip around a fleet of innocent penguins, who would very much like to be removed from this narrative.

30. It drives me insane that the Queen is in charge of the palace, but all the men running it don't tell her anything.

31. I feel like I could do a better job managing the aftermath of Britain's Suez Canal drama than this Prime Minister, and as I've already established: I know nothing.

32. Philip's aforementioned Private Secretary wrote some disgusting letter about their royal tour antics, and now the Queen knows. I'm hoping the rest of the show is her taking him down.

33. Except we know Queen Elizabeth and Prince Philip are currently together, so.

35. Important question: Will this show go so far into Queen Elizabeth II's life that we'll see her reaction to a show being made about her?

36. Another important question: Will Meghan Markle play herself in The Crown Season 6?

37. Wait, literally lol: Queen Elizabeth had to make Philip into a Prince just to make him feel better about how hard his life as a Duke was.

38. They should really just call this show Princess Margaret's Adventures in Being Drunk at Other People's Weddings

39. Wow, world-famous photographer Cecil Beaton's musings on how much housewives hate their "pitiful" lives is not what I want to hear today.

40. Apparently Margaret had some trash boyfriend named Billy who sucked. I could watch her break up with men forever. 🚮 🚮 🚮.

41. Actual sentence while discussing Princess Margaret's prospects: "He served in the Luftwaffe, but we won't hold that against him."

42. I'd like to formally announce that I, too, am in love with Princess Margaret's new love interest Tony Armstrong Jones.

43. I like how Tony is supposed to be this hipster artist loft dweller, but really he's just a rich white guy who would probably be living in Williamsburg and riding the L train in real life.

44. Wait, Tony is The Crown's answer to Dan Humphrey.

45. The Queen did not handle people writing mean things about her in the press well. She would not be able to deal with the reality that is Kim Kardashian's life.

46. Critic to the Queen: "Let normal people get to know you too, open the draw bridge, let people in."

47. Me to all celebrities: "Let normal people get to know you too, open the draw bridge, let people in."

48. This show has convinced me that if we all complain hard enough about accessibility we can convince the elusive chanteuse that is Beyoncé to give a televised speech at Christmas.

49. Realllllllllly wish this Nazi subplot didn't seem so relevant to the world around us right now.

Related Story
Why We Need to Keep Fighting White Supremacy

50. But also...When your random family member turns out to be a secret Nazi (hi, Edward VIII), you don't hide it: You take it public and take them down.

51. Deeply disappointing that Elizabeth had to be convinced by several people *not* to forgive her Nazi sympathizing uncle.

52. Important Princess Margaret update: Her ex-fiancé Peter Townsend is marrying a 19-year-old, which, to be clear, is disgusting. Message to grown adult men, past and future: please do not date teenagers.

53. 🚨 ALERT: Princess Margaret's boyfriend is cheating on her in the most graphic sex scene this show has had.🚨

55. 🚨 Now he's casually having sex with a married couple as their third. 🚨

56. Apparently, Tony once said Margaret had "thick ankles and the face of a Jewish manicurist" so Tony is now dead to me.

57. Please explain to me how I'm supposed to enjoy Margaret and Tony's engagement knowing he makes casual jokes about Jewish people?

58. Queen Elizabeth telling Princess Margaret she has to postpone her engagement because of her pregnancy has me convinced the same thing happened to Harry and Meghan in regards to Kate Middleton's pregnancy....

59. That horrifying moment you realize you're more of a Queen Elizabeth (home in bed by 10, hates parties) than a Princess Margaret.

60. In which the Queen names her new baby and simultaneously throws shade at her future great-grandson: "We briefly considered George but there's been too many of those."

61. The queen just hurt herself taking off a pair of boots and I've never felt more connected to her.

63. Wait never mind because this acting is kind of...terrible?

63. Irrelevant because THE QUEEN'S CORGIS HAVE THEIR OWN BEDROOM.

68. And that Jackie called Queen Elizabeth "unintelligent and unremarkable".....👀.

69. Also, JFK is giving Jackie credit for the Queen going to Ghana and solving diplomatic drama. STOP PITTING WOMEN AGAINST OTHER WOMEN, JFK.

69. Oh look, they're finally acknowledging that Prince Charles is in this show.

70. Prince Charles is terrible at sports.

73. Damn, there's an entire episode about how Prince Philip's family were Nazis and he was literally flown to school on a Nazi airplane. Not exactly something the royal family talks a lot about....

74. Okay, so Prince Philip clearly had a very sad childhood filled with unexpected deaths, trauma, and a damp climate, but that doesn't excuse his terrible behavior.

75. Just want to let everyone know that the finale episode literally opens with a crotch shot of Philip, kay thanks.

76. Something dramatic is happening with Philip's osteopath who is also maybe a Russian spy (???), but it's been a long 8 hours and I can't really understand anything at this point.

77. Very here for this season ending with Elizabeth pointing out that three PMs couldn't handle the job she's been doing for a decade.

78. OH MY GOD Elizabeth is finally confronting Philip about his alleged affairs, and she's agreeing to look the other way so that he can sex who he wants, but he's like don't look the other way, look this way.

Did Prince Philip Cheat on Queen Elizabeth?
Mehera Bonner Contributor Mehera Bonner is a news writer who focuses on celebrities and royals—follow her on Instagram.
Advertisement - Continue Reading Below
More From The Crown
Will Harry & Meghan Feature on 'The Crown'?
Imelda Staunton Will Play the Queen In 'The Crown'
Advertisement - Continue Reading Below
Everything We Know About 'The Crown' Season 4
Fact-Checking the Third Season of 'The Crown'
Lord Mountbatten Died Suddenly and Tragically
The Real Photos Behind 'The Crown' Scandal
What Camilla and Andrew's Relationship Was Like
Who Is Lucy Lindsay-Hogg, Lord Snowdon's GF?
Did the Queen Read Charles' Private Letters?
Is 'Guardian' Journalist John Armstrong Real?