NBC has aired a lot of live musical events at this point, but next year's Jesus Christ Superstar may have already solidified its place as the best one yet. Why? Because John Legend is literally playing Jesus.

Variety confirmed today that Legend has been cast in the title role of the live musical, which will air live from Brooklyn, New York on April 1 next year. This will differ from NBC's previous musicals in that it will be presented as an actual concert with a live audience.

“We’re all overjoyed to have world-class musical artist and producer John Legend starring as Jesus,” said Robert Greenblatt, chairman of NBC Entertainment. “This score demands a singer with an amazing range and an actor with great depth, and there isn’t anyone better to bring this story to a new audience. His casting is also groundbreaking as the traditional image of Christ will be seen in a new way.”

“I’m thrilled to join the cast of this production of Jesus Christ Superstar Live in Concert,” Legend said. “It’s such a powerful, meaningful musical and I’m humbled to be part of this performance. We’ve already formed an incredible team, and, as we finish casting, I’m certain we will put together some of the greatest talents around to do this work justice.”

Jesus Christ Superstar Live in Concert is based on the 1971 musical which chronicles the last week of Jesus' life. Alice Cooper has been cast as King Herod, with further casting yet to be announced.

In case you needed one more reason to be excited for this, it brings Legend one step closer to an EGOT—he's already won 10 Grammys, an Oscar for Selma, and a Tony for his work on this year's Jitney. All he needs now is the Emmy, and this role could put him into the running for next year. 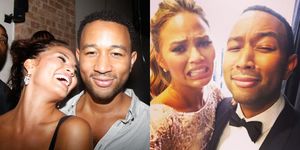 Best Chrissy Teigen and John Legend Couple Moments
This content is created and maintained by a third party, and imported onto this page to help users provide their email addresses. You may be able to find more information about this and similar content at piano.io
Advertisement - Continue Reading Below
More From Culture
'Ginny & Georgia' Season 2: Everything We Know
The Ultimate Ranking of 'GOT' Sex Scenes
Advertisement - Continue Reading Below
The Cast of 'The Nevers' Plays Trivia
The Most Exciting New TV Shows of 2021
Get to Know Delessa From 'The Circle'
36 Movies With Super-Romantic Sex Scenes
Anne Hathaway & Elizabeth Nyamayaro on Compassion
When You Can Expect New Episodes of 'The Circle'
Get to Know Courtney From Season 2 of 'The Circle'
'The Circle' USA Is Actually Filmed In the U.K.