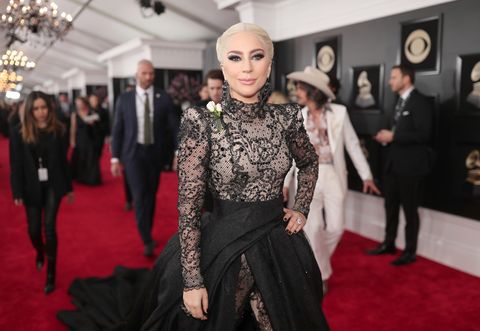 At the 2018 Grammy Awards tonight, celebrities are adding a special accessory to their ensembles—a white rose. The white roses are a symbol of support for the Time's Up initiative, thanks to a new group called, "Voices in Entertainment."

The group of 15 women in music was established this week by Meg Harkins and Karen Rait when they realized nothing was being done at the Grammys in support of the movement. Taking matters into their own hands, group members sent letters to stars like Kelly Clarkson, Rita Ora, and Halsey asking them to participate by wearing a white rose on the Grammy Awards red carpet.

"We choose the white rose because historically it stands for hope, peace, sympathy and resistance."

“We choose the white rose because historically it stands for hope, peace, sympathy and resistance,” the letter reads. “Please join us in support of equal representation in the workplace, for leadership that reflects the diversity of our society, workplaces free of sexual harassment and a heightened awareness of accountability that our sisters started on January 1st and continued through the Golden Globes and onward.”

Rait told Billboard, “Music artists have a lot of impact. So it’s only fitting that music’s biggest night show the support for equality and safety in the workplace and that people need to be cognizant of their fellow employees."

The roses were introduced following the Time's Up pins that were accompanied by all-black ensembles on the Golden Globes red carpet on January 7.

Here's all the stars who wore white roses on the red carpet:

Hennessy Carolina and Cardi B

Getty Images
Related Story
Grammys 2018: The Full List of Nominees
This content is created and maintained by a third party, and imported onto this page to help users provide their email addresses. You may be able to find more information about this and similar content at piano.io
Advertisement - Continue Reading Below
More From The Grammys 2021
Megan Thee Stallion, Cardi B Stole the Show
Taylor Thanked Joe During Her Grammys Speech
Advertisement - Continue Reading Below
Beyoncé Is the Winningest Woman in Grammys History
Watch Dua Lipa's 2021 Grammys Performance
Billie Eilish, Harry Styles React to Each Other
The Best Twitter Reactions to the 2021 Grammys
Megan Thee Stallion Frosts Herself in 222 Carats
The Best Red Carpet Looks at the 2021 Grammys
What to Expect From the Grammys This Year
How to Get Demi Lovato's Look From the Grammys